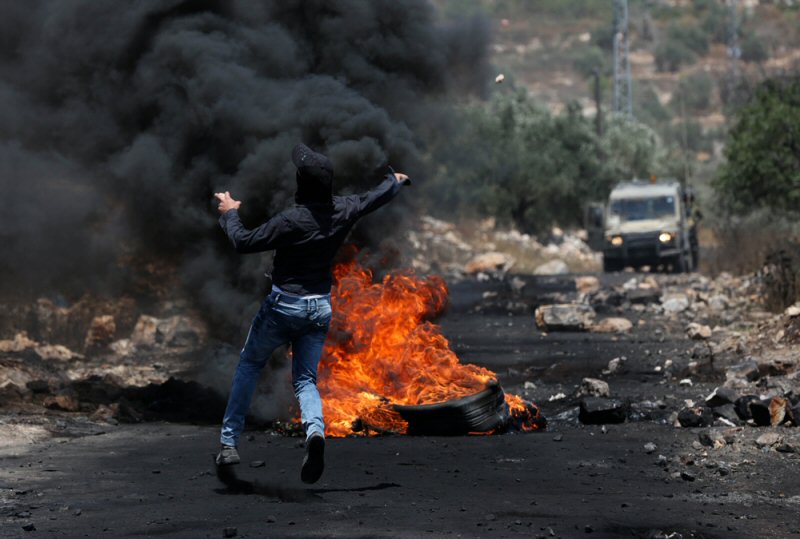 One scene from the Friday weekly protests against the Israeli occupation in Kufr Qaddoum. (WAFA photo/Ayman Noubani)

Six years ago today, the Palestinian residents of Kufr Qaddoum, a peaceful village near Qalqilya, in the north of the occupied West Bank, decided to rise against the Israeli military’s closure of a vital and historical village road and demand its reopening.

In six years of uprising, the village witnessed 500 marches, usually carried out on Fridays following the prayer. During these protests, WAFA reports, an elderly man was shot dead by the army during confrontations and 85 wounded with live bullets, including six children, some of them lost an eye or speech ability, 170 people detained, homes destroyed, fields torched, farms wrecked, military checkpoints, collective punishment and more than $70,000 in fines imposed on the helpless Palestinian civilians.

But, all of this did not deter or tire the residents, who are determined to continue with their weekly activity until they get the vital road reopened.

According to village activists, Israel closed the road in 2003, during the  second Palestinian Intifada against the occupation.

However, when it became clear to the villagers the  true intention behind the closure of the road, and making it off to Palestinians, they decided to rise and protest this act.

Murad Ishtawi, one of the leaders of the village Intifada, said that it became clear that Israel closed the road for Palestinians so that Jewish settlers in the area will have easy access to their settlements and to eventually expropriate all land around it, to expand the unlawful settlements that were built over the years on 4,000 dunams of the village’s 23,000 dunam area.

“All the villagers have decided to start the weekly protests in the beginning of July 2011 following years of suffering from the closure of the main road that forced residents to use long, rough and deadly alternative roads,” said Ishtawi.

The Israeli military’s reaction to the peaceful protests usually ends up violent.

The army fires tear gas and rubber-coated metal bullets at the protesters and homes in the village, causing many suffocation and injuries. Raids are usually conducted against the residents during the night to detain activists. Army checkpoints often restrict movement of people, and international solidarity activists are pursued and prevented from joining in the weekly protests.

“Even though six years have passed, we are not getting weaker or less resolute,” said Ishtawi, who says the protests are going to continue until they achieve their goal.