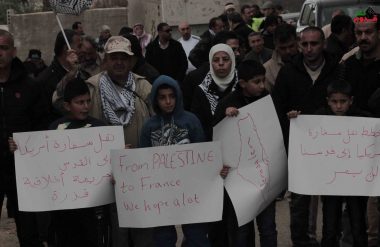 Dozens of Palestinians, accompanied by Israeli and international peace activists, conducted the weekly protest against the illegal Israeli Annexation Wall and colonies, in Kufur Qaddoum, east of the northern West Bank city of Qalqilia, demanding the international community, and the Paris Conference, to act on ending the Israeli occupation of Palestine, and to ensure the removal of its colonies.

The protesters called for implanting all international resolutions, in order to establish a viable and independent Palestinian state, with East Jerusalem as its capital, and to ensure the implementation of the internationally-guaranteed Right of Return of all refugees.

Also participating in the procession was Waleed Assaf, the head of the Popular Committee against the Annexation Wall and Colonies, and Dalal Salama, a member of the Central Committee of Fateh movement.

The protesters demanded an actual and effective implantation of all related United Nations and Security Council resolutions, calling of ending the illegal Israeli occupation of Palestine, and the removal of all colonies, illegally built on privately-owned Palestinian lands, as they represent one of the biggest obstacles to peace in the region, and are fragmenting the West Bank, including Jerusalem.

They also said that the upcoming Paris Conference, that will be held on January 15, with the participation of various influential countries, must oblige Israel to abide by International Law and the Fourth Geneva convention.

The protesters also strongly denounced the statement of U.S. President-elect Donald Trump, in which he vowed to move the American Consulate from Tel Aviv to occupied Jerusalem.

It is worth mentioning that the soldiers attacked the protesters, leading to clashes, and fired live rounds, rubber-coated steel bullets and gas bombs.