Two Injured, Many Suffer Effects of Teargas Inhalation In Bil’in 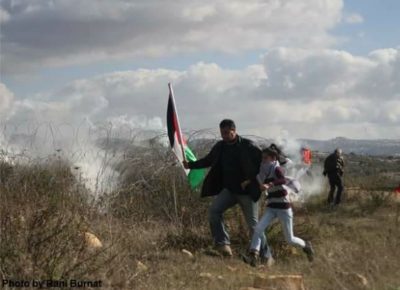 Israeli soldiers attacked, Friday, the weekly nonviolent protest against the illegal Israeli Annexation Wall and colonies, in Bil’in village, west of the central West Bank city of Ramallah, wounding two Palestinians, and causing many to suffer the effects of teargas inhalation.

The Popular Committee against the Wall and Colonies in Bil’in said the soldiers fired sponge-tipped bullets, gas bombs and concussion grenades at the nonviolent protesters, just as they got close to Annexation Wall, isolating the villagers from their lands.

The protest was held by dozens of Palestinians, accompanied by many Israeli and international peace activists. It added that a child, identified as Abdul-Khaleq Burnat, was shot with a sponge-tipped bullet in the head, and received the urgently-needed treatment before being moved to Palestine Medical Complex. Local activist, Ashraf Abu Rahma, was mildly injured and received the needed treatment by the local field medics, while scores of protesters suffered the effects of teargas inhalation.

Some of the protesters managed to climb the wall, and raised Palestinian flags on it, before the soldiers forced them away.

During the procession, the marchers chanted for national unity, and ongoing resistance against Israel’s illegal grab of Palestinian lands, and its violations against the Palestinians, including political prisoners.

Abdullah Abu Rahma, the coordinator of the Popular Committee against the Wall and Colonies in Bil’in, said the protest was also held in condemnation of illegal promises made by U.S. president-elect Donald Trump, who vowed to move the American consulate from Tel Aviv to Jerusalem. Abu Rahma added that Bil’in is ongoing with its protests for the twelfth consecutive year, rejecting Israel’s escalating violations, including its occupation and the ongoing illegal construction and expansion of its colonies, in direct violation of International Law and the Fourth Geneva convention.