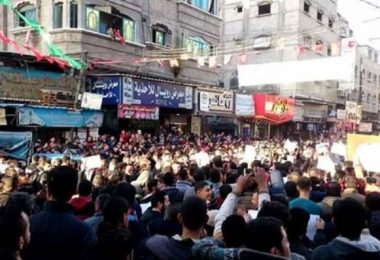 The Palestinian Center for Human Rights (PCHR) follows up with concern the latest incidents in Jabalia refugee camp, where Palestinian security services used excessive force against civilians, including journalists.

PCHR stresses the significance of adhering to the legal and international standards when dealing with civilians in all circumstances. PCHR calls upon the Attorney General to follow up the incidents and ensure compliance with legal procedures.

Moreover, PCHR emphasizes that the security services’ duty is to maintain security and protect public property within the law with strict commitment to the relevant international standards, especially the 1979 Code of Conduct for Law Enforcement Officials.

According to PCHR’s investigations, at approximately 16:15 on Thursday, 12 January 2017, a peaceful demonstration was organized in the center of Jabalia refugee camp in the northern Gaza Strip, protesting the aggravating electricity crisis.

The protest came upon an invitation from youth groups on “Facebook”. Around 500 protesters peacefully made their way from Jabalia refugee camp towards al-Hojha Street and then to al-Fakhoura area and Beit Lahia housing Project.

They arrived at the Gaza Electricity Distribution Corporation (GEDCO) building located behind the Engineers Syndicate in Beit Lahia. Around 5000 persons then joined the demonstration chanting slogans against GEDCO.

Palestinian police officers were there, so altercations occurred between them and the protestors.

A number of youngsters then threw stones at the GEDCO building and police officers, who in response fired live bullets in the air and attacked civilians with batons. As a result, 7 civilians sustained bruises and were taken to Kamal ‘Odwan Hospital and the Indonesian Hospital.

Moreover, the police officers attacked journalists while covering the protest. Journalist Mohamed Abed al-Razeq Abdullah al-Baba (48), a photojournalist at the AFP, sustained an incised wound to the head after being beaten by the police.

They also confiscated his camera and the memory card. Iyad al-Buzom, Spokesperson of the Interior Security, then came to the hospital to officially apologize for al-Baba and returned the camera During the protest, a number of civilians were arrested by the police officers.

PCHR’s fieldworker said that following the protest, security officers raided many houses and arrested activists. Some of them are so far under arrest. PCHR stresses that security services’ duty is to maintain security and protect civilians and public and private property from any riot or violence acts during peaceful demonstrations and protests.

PCHR also underscores that security services should comply with the principles of proportionality and legality of using force and condemns any random or excessive use of force.

PCHR also stresses that use of force is not the solution and further complicates matters. PCHR also emphasizes the right to freedom of expression and opinion and right to peaceful assembly, but also protestors should abide by law and maintain the peaceful nature of the demonstration in addition to not attacking the police or property.

In light of the above-mentioned, PCHR:

1- Calls upon the Attorney General to investigate the yesterday incidents in Jabalia refugee camp, including beating civilians and a journalist and the security officers’ violations, and hold those responsible accountable;

2- Calls upon the security services in Gaza to respect law and human’s dignity, take all necessary procedures to stop those violations and respect civilians’ public freedoms and press freedoms guaranteed under the international human rights standards and

3- Calls upon the security services to release all civilians arrested on grounds of the protest.