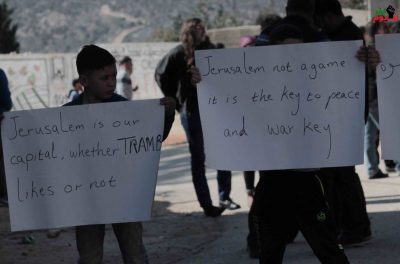 Hundreds of Palestinians, and several international and Israeli peace activists, held the weekly nonviolent protest on Friday, this week denouncing the police killing of a Palestinian in Um al-Hiran town in the Negev, and the demolition of many homes there.

Morad Eshteiwy, the coordinator of the Popular Committee in Kufur Qaddoum said hundreds of residents, Israeli and international peace activists marched while chanting against the ongoing occupation and the “Israeli racists policies.”

The protesters also carried signs affirming the Palestinian right to liberation and independence, and also stating that “Jerusalem will be the capital of Palestine,” “From Kufur Qaddoum To Um al-Hiran , One people, One Nation.”

Eshteiwy added that dozens of soldiers, accompanied by armored vehicles and bulldozers, used excessive force against the protesters, leading to clashes.

It is worth mentioning that the Palestinian, who was killed in Um al-Hiran, has  been identified as Yacoub Mousa Abu al-Qee’an, 47, while an Israeli officers, identified as Erez Levy, was also  killed.