Kushner: No Solution to Israeli-Palestinian Conflict 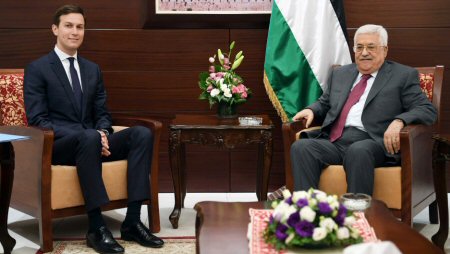 Senior advisor to President Donald Trump, Jared Kushner,  has expressed frustration regarding the “peace process” between the Palestinian Authority and Israel.

Speaking to a group of congressional interns, in what was supposed to be an off-the-record meeting, Kushner said that, after researching the conflict’s history and speaking with “a lot of people,” he’d learned that “this is a very emotionally charged situation.”

Al Ray reports that, according to Khaled Elgindy, an analyst in the Center for Middle East Policy at the Brookings Institution, Kushner doesn’t need to be a veteran diplomat or an experienced negotiator — but he must “understand the nuances of this conflict.”

“The problem you have is that there’s a very steep learning curve,” said Elgindy. “But, I’m not sure, based on what I read, that Kushner has caught up to that learning curve.”

As Kushner revealed at the end of Wired’s audio clip, despite all his bravado, he doesn’t seem to actually have any new ideas — or any ideas at all, really — for how to move negotiations between the Israelis and Palestinians forward. Asked by someone during the off-the-record interview session how the Trump administration’s approach to peace is unique, he simply responded, “I don’t know.”

Kushner is a strong supporter of Israel, a friend of Israeli Prime Minister Benjamin Netanyahu, and has attended family visits.

When Palestinian President Mahmoud Abbas met Kushner in June, a Palestinian official said that Trump’s brother-in-law appeared to be Netanyahu’s adviser and not a neutral party.