Largest Palestinian team to date arrives in Rio for Olympics 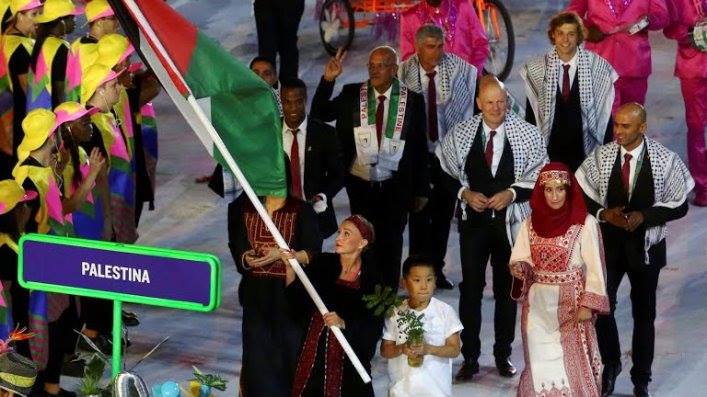 Six Palestinian athletes representing Palestine walked in the opening ceremonies of the Summer Olympics in Rio on Friday – marking the largest team since Palestine began competing in the Olympics in 1996.

No athlete representing Palestine has yet won a medal in the Olympics, which sports analysts say is not surprising, considering the lack of facilities in Palestine, and travel restrictions imposed by the Israeli military authorities that control all aspects of Palestinian life. Because of these restrictions, Palestinian athletes are prevented not only from traveling abroad for competitions, but also from traveling within Palestine for competitions with other Palestinian athletes.

The Palestinian Olympic team in 2016 consists of:

The two swimmers who are participating in the Olympics point out that there is no Olympic-size swimming pool anywhere in Palestine (although there are many such pools in Israel, Palestinian athletes are not allowed to use them).

Mary al-Atrash, who is a Palestinian Christian from Beit Sahour, swims in a pool that is half the size of the Olympic-size pool where she will be competing in Rio.

She said that she does not expect to win a medal, noting, “Because of all the difficulties that Palestinians live under … it makes it harder to practice and compete in our sports”.

Al-Atrash and the other athletes say that they hope their participation in the Olympics will help raise awareness about the plight of the Palestinian people, who have been living under Israeli military occupation since the state of Israel was created on Palestinian land in 1948.

Despite some Israeli commentators’ claims that the six members of the team are not all Palestinian, the Palestinian athletes have provided documentation of their Palestinian identity – although a couple of them are refugees unable to return to their homeland by the Israeli occupation authorities.