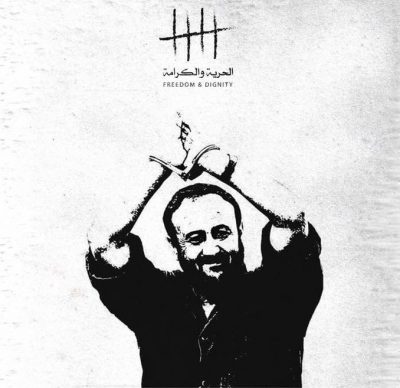 Below is Marwan Barghouthi’s statement in full:

In the name of God, the merciful
To our great people, the people of struggle and sacrifice
To our people of revolution and intifada
To the children of the Arab and Islamic nations
To the free people of the world

Friends and lovers of peace and justice everywhere…The Palestinian prisoners in the prisons and dungeons of the Zionist enemy have been engaged in an open hunger strike from 17 April until the evening of 28 May. The prisoners in this national strike have marked the longest collective strike, a historic epic in the prisoners’ movement’s record over 50 years.

Despite the brutal repression and indiscriminate terror used by the Israeli Gestapo-style administration in the face of the strike, in which all strikers were transferred from their prisons in an unprecedented action, hundreds of them were held in solitary confinement and special repressive units (Matsada, Dror and Yamaz) were used in round-the-clock raids and inspections throughout the 42 days of the strike. They resorted to the transfer of striking prisoners in harsh and brutal conditions in an attempt to impact or undermine their will, confiscating all personal belongings, including underwear. The prisoners were deprived of all sanitary and hygiene materials, turning their lives into hell and releasing shameful rumors and lies. Yet, the record of the prisoners has been one of unprecedented steadfastness in the record of the Palestinian prisoners’ movement and the Israeli repression failed to break their will. From this historical and heroic scene, I stand on record, and with great pride, saluting this great steadfastness of the hunger strikers. And I salute with great reverence the martyrs, their families, and all those who rose up, were wounded and detained in this battle of freedom and dignity for Palestine.

I would also like to pay tribute to our great people of our pure Palestine, from the river to the sea, and in exile and diaspora. I thank them for their great support and unbridled efforts for the cause of the prisoners and their strike, which has returned the Palestinian cause to the forefront of the international political landscape. At the same time, I salute the Arab, Islamic and friendly peoples of the world for the level of solidarity and participation with which they supported us.

And salutes to all of those who participated in local and international media campaigns, as well as the Bar Association, the Doctors’ Syndicate, the Ministry of Education, the Palestinian Prisoners’ Society, and the Prisoners’ and Former Prisoners’ Affairs Commission, emphasizing that the battle of freedom and dignity for Palestine is an integral part of the struggle for freedom, independence, return and the overthrow of the apartheid system in Palestine and the end of the occupation.

Our great people, despite the fact that the government of terror that leads the apartheid regime of Israel launched an attack on the hunger strike in a failed and desperate attempt to hide its crimes, this did not intimidate the prisoners nor break their iron will. It did not dissuade them from fighting this battle with determination and conviction, and carrying out an epic heroic saga. They have been able to extract a number of just and humanitarian achievements, the first of which is to restore the second monthly visit to the families of the prisoners, which was stopped almost one year ago, as well as addressing problems ongoing for years related to the conditions of daily life, including the conditions of women prisoners, child prisoners, ill prisoners, the “bosta” and transfer processing, the “canteen” (prison store) system, the introduction of clothing, as well as the formation of a committee of senior officials of the Prison Service for continued dialogue with the prisoners’ representatives in the forthcoming few days to discuss all issues without exception.

In light of this and with the coming of the holy month of Ramadan, we have decided to suspend the strike to give the opportunity to carry out these discussions with the Prison Service, emphasizing our strong readiness to resume the strike if the Prison Service does not fulfill its commitments made to the prisoners.

On this occasion, I extend my warmest congratulations to the heroic prisoners for their steadfastness and achievements of humanity and justice, with a special tribute to the prisoners of Nafha prison, who played a leading role in the success of this strike and the achievement of this great victory. I also pay tribute to the prisoners who went on strike in the prisons of the Negev, Ofer, Ramle prison clinic, Ashkelon, Gilboa, Megiddo, Ramon, and the children and women prisoners, and, finally, in Hadarim prison, and to everyone who participated in all of the detention centers and prisons, I hold their hands and kiss their high foreheads.

And with the renewal of their covenant and participation in this national strike, the longest and fiercest in the Palestinian prisoners’ movement’s history, there is a turning point in the relationship between the prisoners and the mechanisms of the prison administration. From now on and after today, we will not allow any infringement upon the achievements and the rights of the prisoners. In addition, this battle is also a force to rebuild and unify the prisoners’ movement in its various components, as a prelude to the formation of a unified national leadership in the coming few months. This is in preparation for the battle to extract the recognition of the prisoners in the dungeons of the Israeli occupation as prisoners of war and prisoners of freedom and the full application of the Third and Fourth Geneva Conventions.

To our great people, as I renew the tribute to the martyrs of the battle of freedom and dignity, I call upon the Palestinian president Abu Mazen, the PLO leadership and the national and Islamic factions to carry out their national duty to the prisoners by working to liberate them and gain their freedom. Again, I warn against any resumption of negotiations before requiring a comprehensive release of all prisoners and detainees. I express my special thanks to all institutions and bodies related to the prisoners, especially the Prisoners’ Affairs Commission, headed by the struggling brother Issa Qaraqe, the Palestinian Prisoners’ Society and the struggling brother Qaddoura Fares, and the Higher Commission for Prisoners’ Affairs, the popular and international campaign for the release of all Palestinian prisoners, led by the struggling lawyer Mrs. Fadwa Barghouthi.