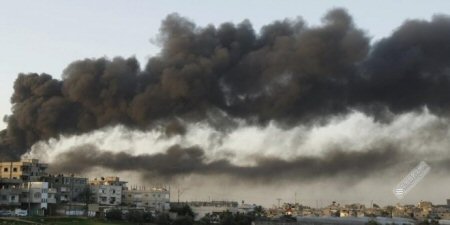 Minister of Defense Avigdor Lieberman has warned that Israeli aggression in Gaza while continue so long as ‘the score remains unsettled,’ according to a Sunday interview with Ynet.

Lieberman’s warning was issued in response to an explosion along the Israel-Gaza border that wounded 4 IOF soldiers, two of which were considered serious and rushed to the ICU at the Soroka Medical Center in Be’er Sheva.

‘It will take two days, a week, or two weeks. We’ll eliminate anyone behind the attack’s execution,’ Lieberman warned.

In retaliation, PNN further reports, Israel launched a series of 6 airstrikes against Hamas targets late Saturday evening, including an outpost close to the sight of the original explosion and a tunnel in the Zaytun neighbourhood.

The situation continued to escalate when 2 retaliatory rockets were fired towards Israel from the Gaza Strip, prompting Israeli forces to conduct a second air raid.

The second series of attacks raised the total number that evening to 18, according to Liebermann, as well as Palestinian news sources.

Lieberman lauded the attack as ‘perhaps the most significant and widespread strike we carried out since Operation Protective Edge.’

Any incident emanating from the Gaza Strip would be the responsibility of Hamas, that has ruled Gaza since disputed elections in 2007, said Lieberman, even if they were not conducted by Hamas or its military wing, the Izz ad-Din al-Qassam Brigades.

‘Hamas is the ruler, and we consider Hamas to be responsible for everything that is done in the Gaza Strip and from the Gaza Strip,’ said Liberman.

Previous airstrikes against Hamas targets in Gaza have been in response to rocket launches conducted by the al-Quds Brigades, the military wing of Islamic Jihad organization in Palestine, as well as other members of the Popular Resistance Committee.

In January, Israeli forces struck multiple Hamas targets in the Gaza Strip after the al-Quds Brigade launched a series of mortars into Israeli territory.