‘Life Is All About Trying’: Disabled Palestinians Defy Challenges 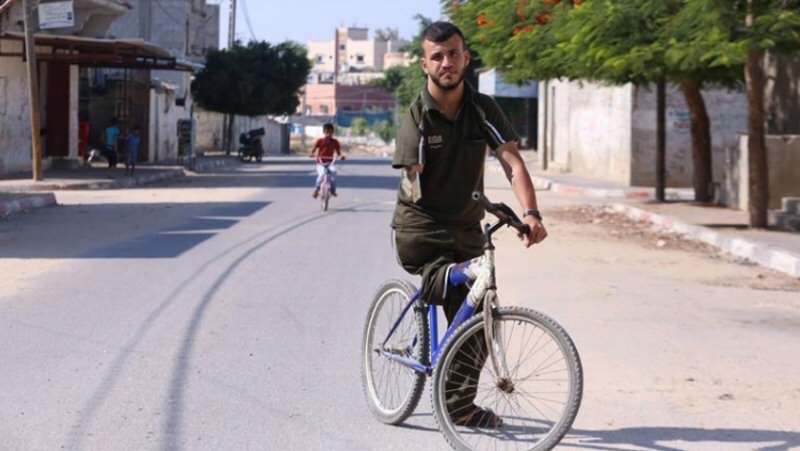 Some laughed at him, others told him that he wouldn’t succeed. But with a strong will and positive attitude, Abdulrahman Abu Rawaa proved them wrong.

With just one arm and a leg each, he can easily ride his bike along Gaza’s sandy streets.

He took off the pedal and chains to adjust the bike to his needs, allowing himself to easily balance on the bike and push himself forward.

It’s the easiest way for him to get around his neighbourhood in the “Bedouin Village”, in the northern Gaza Strip.

“Learning how to ride a bike has been my greatest accomplishment. It might not look so, but it really is,” Abu Rawaa said.

“Everyone told me it’s dangerous; some people criticised me [for trying] and even made fun of me at first. But I challenged all of that. I’ve proven to myself and to others that my disability isn’t really going to ‘disable’ me.”

For the 23-year-old, life has always been about trying.

Having been born without an arm and then losing his leg after two surgeries, he hasn’t allowed his physical disability to prevent him from trying to live life to the fullest.

Monday marks the International Day of Disabled Persons. Despite the immense obstacles, Palestinians in Gaza have shown a strong will to defeat their disabilities and achieve their dreams.

For the two million Palestinians living in Gaza under an Israeli-Egyptian siege, life is already difficult enough.

But for those with physical disabilities, they face additional challenges – something as simple as moving from one neighbourhood to the other in one of the world’s most densely populated areas is an immense challenge.

Most buildings are not accessible for the disabled people. There are no braille signs for the visually-impaired. With a dire economic situation, there are little to no resources to assist them.

Artificial limbs made in Gaza are typically of poor quality since the blockade has disrupted imports of prosthetic limbs and raw materials used to make them.

The limbs are made out of hundreds of different parts, but even if a single part is missing, it’s difficult for the limb to function.

Consequently, for many in Gaza, the prosthetic limbs that they use are for aesthetic purposes – to be able to put on a prosthetic leg or arm while taking photos for special occasions, for instance.

Rawaa had tried wearing an artificial limb, but it was terribly uncomfortable, despite costing $2,000 – an exorbitant amount for the average family in Gaza.

It was impossible for Rawaa to walk with it, as it pulled and scratched his skin.

In the first grade, he tried to use a wheelchair, which was also futile. He would fall to the ground and would have to push his chest against the wheelchair seat to push forward and move.

“But in fourth grade, I once saw my brother Tareq riding his bike and I asked him to let me try. It was a good try, although I fell. My father was impressed that I can balance myself on the bike, and I asked him for a bike. He bought me one. Step by step, I did just fine. And in the sixth grade, I totally depended on it to go to school, though my school was around two kilometres away from home.”

Stigmatisation and a lack of knowledge about disabilities persist in Gaza, Rawaa explained. Some ask him how he can cook or fix his bike on his own. For Rawaa, these are strange questions since he is entirely self-reliant.

“When my bike is broken, I’m the one who fixes it,” Rawaa said. “Some people say ‘You can’t!’ Immediately, to them I say, why don’t you try? It could work and it could not, but at least try. If you’re willing to try, you’ll succeed in one way or another. Everyone should have the will to try. Life is all about trying.”

‘They’ve amputated my leg, not my dream’

While misconceptions about disabled persons persist, Rawaa believes it has decreased over the years due to the three Israeli military assaults on Gaza and the Israeli attacks on the Great Return March demonstrations, which has left dozens of unarmed demonstrators disabled.

It has become a common sight today on the streets to see Palestinians with missing limbs. Unlike Rawaa, who was born with a disability, they face a harsh learning curve in adapting to their new life.

Alaa Aldali, 21, has been trying to persuade himself that he was born without a leg to adjust more easily. Israeli forces shot his leg with an expanding “butterfly” bullet on March 30, the first day of the Great Return March demonstrations.

He says he was standing with his friends more than 300 metres away from the Israeli fence when he was suddenly hit in the leg. He found himself on the ground, with smoke coming out of his wound.

“It was scary… It wasn’t like a bullet; it looked like a grenade exploded in my leg,” Aldali said.

After undergoing eight surgeries in the hopes of saving his leg, it was amputated due to serious damage to his arteries and nerves.

“It’s quite hard, but that’s all I can do now. You know, just on the way home, while I was getting out of the taxi, I thought my right leg was still there and I almost fell,” Aldali said from his bedroom in Rafah, in southern Gaza.

Trophies, medals and plaques decorate his table. For the past four years, he has spent practically every waking moment on the move, cycling, and would mostly come home just to sleep.

Ranked third in the occupied Palestinian territories, Aldali’s dream of representing Palestine internationally presented itself with an invitation to compete in the international cycling competition that took place in Indonesia in late August.

But his dream was crushed that fateful afternoon. Since then it’s been an uphill battle – mentally and physically.

Aldali says he’s determined to keep fighting for his dream of competing for Palestine as a cyclist, even if it’s just with one leg.

“They’ve amputated my leg, but not my dream. I’m coming back to do my favourite sport. We’ll also return to our home. Those sacrifices are not going to no avail,” Aldali said.

For others, such as 27-year-old Abeer Elhorokly, the Israeli occupation affects them before they’re born.

During the First Intifada in 1992, her then-pregnant mother was subjected to gas inhalation by Israeli forces. Consequently, Elhorokly was born with deformed nervous cells, which left her in a wheelchair.

Like Aldali, Elhorokly found her passion in playing competitive sports – basketball and tennis. Her team has achieved first place in the Gaza Basketball League for the third time in a row and she aspires to compete internationally in tennis for disabled athletes.

However, with the siege on Gaza now in its 12th year, many Palestinians – disabled or not – are deprived of such opportunities.

Gaza’s job market remains stagnant with an unemployment rate of 44 percent, but for the disabled population, it’s at 90 percent.

Elhorokly graduated two years ago with a BA in Public Relations and Media, and is determined to find work. Palestinian labour law stipulates that five percent of its workforce must include disabled people. However, this isn’t applied on the ground, Elhorokly said.

“I want to be a big journalist and prove that we’re capable. To be a journalist and have a disability at the same time is a real challenge and I love challenges,” Elhorokly said.

Rawaa has been raising chickens in his backyard for a living. He would like to eventually afford a new home as his family’s house becomes flooded in winter.

He has been approaching various institutions with his proposal, trying to find funding to expand his chicken-raising project. Rawaa has yet to find support, but he says he will keep trying.

“Never let anyone or anything stay in your way. If you think you can’t take the stairs by yourself, ask yourself – did I try? You can always find ways. Create your own solution,” Rawaa said.

“One should always have the hope and courage to jump over life’s challenges – to try at least.”