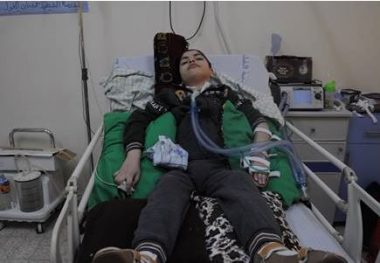 On Wednesday, 21 August 2014, the Reify family was targeted in their agricultural land located in El-Daraj neighborhood, a densely-populated area of Gaza city.

The incident happened on the forty fifth day of the war when many members of the family were together in their land, playing, planting and eating, like any other day. The Israeli attack resulted in the killing of 7 family members, including 5 children, and injury of a man and child.

Mohamed Naser el-Reify (11), victim of this attack, lost his twin brother, Omar; his father; uncle and cousins. Mohamed himself was left as well with severe psychological and physical problems. His childhood memories changed from playing on the street to lying on the hospital bed and being unable to move. His body was paralyzed from after sustaining a fracture in the bone marrow, while he breathes through tracheostomy tube.

Mohamed is currently staying at Al-Wafa hospital, in Al-Zahra, South of Gaza city, where he receives his physiotherapy treatment. However, he doesn‚Äôt feel any progress, neither in Gaza hospitals nor in Jerusalem, where he was also treated before.

‚ÄúI wish I could receive proper treatment and get better soon.‚Äù He strongly believes that time matters and everything is possible with patience. ‚ÄúAll I want is to go home and be able to sit with my family,‚Äù Mohamed adds.

As Mohamed is unable to attend school, he receives education at the hospital, as his teachers come to give him private lessons.

His favorite subjects at school are history and geography because ‚ÄúHistory teaches us about the past and geography teaches us about the world we are living in.” Being unable to attend classes and be with friends at school, Mohamed said in tears ‚ÄúI miss my old school, old friends and family.‚Äù Like many other children, he had dreamed of growing up and becoming a successful engineer. ‚ÄúKnowing that I am unable to do that now makes me sad,‚Äù Mohammed describes.

Mohamed tries not to remember the incident, as it brings back horrible memories. He wants the incident to be erased from his memory due to the severe suffering he has experienced. Following the attack, Mohamed‚Äôs speaking ability was affected for 6 months as a result of the shock, and he had to stay in the Intensive Care Unit (ICU) in the hospital for half a year.

Mohamed and his family have lost strong emotional support when they lost his father. As the main breadwinner of the family is not here anymore, the responsibility of supporting the family is under difficult circumstances now as it falls on the shoulders of the mother. Mohamed wants the world to know his story and asks anyone, who has the ability to help victims of such attacks to do so. ‚ÄúI wish for all kids in the world to be in good health and able to enjoy their childhood,‚Äù Mohamed adds.

The Israeli human rights violations and war crimes against Palestinian civilians and property lasted for 50 days in 2014 ‚Äì 50 days of bombing by air, sea and land throughout the Gaza Strip.

As a result, 2,216 Palestinians were killed, 70% of whom were civilians, including 556 children and 293 women. The Israeli use of excessive force against civilians and property, including indiscriminate shelling and systematic destruction, completely destroyed entire residential neighborhoods and families.

Today, 65,000 who were displaced during the offensive are still homeless, while the reconstruction process progresses too slowly.