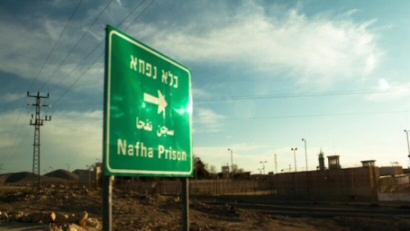 The Palestinian Prisoner’s Society (PPS) has warned of the deteriorating medical conditions of two Palestinian detainees who have been held in Israel’s Nafha prison since 2004, in a statement issued Monday, following PPS lawyer’s visit to the prison.

Shadi al-Hawi was detained in 2004 while attempting to leave the besieged Gaza Strip, to Germany, in order to receive medical care due to “a shard in his head,” and has been waiting to undergo surgery ever since, the statement said, according to Ma’an News Agency.

According to PPS, the 33-year-old, who is serving a 14-year sentence, was detained while he was unconscious. Once he regained consciousness, he found himself in Israel’s Rambam Hospital in Haifa.

The lawyer said that al-Hawi has been taking 14 pills a day, most of them painkillers, to alleviate his severe and chronic pain.

Meanwhile, 37-year-old Majid al-Jarar has also been in serious medical condition since he was detained in 2004, from the northern occupied West Bank city of Tulkarem.

Jarar, who is serving a 30-year prison sentence, suffers from skin issues, including boils and black spots on his skin that cause sever pain.

The PPS statement said that Israeli doctors told Jarar they would conduct weekly blood tests to follow up on his condition, but they have not committed to the promise and have conducted only one medical test over the past six-month period.

Jarar has also been suffering from hearing issues and a knee injury from being hit with shrapnel which causes chronic pain.

There are hundreds of sick Palestinians held in Israeli prisons, and rights groups have widely condemned Israel for its medical negligence of Palestinians in its prisons, which prisoners’s rights group Addameer has called a “deliberate policy of neglect.”

Addameer reported, in 2016, that in each of the seven sections of Nafha prison there are at least 20 medical cases, some of whom require medical follow-up and periodic testing, while other need urgent surgeries.