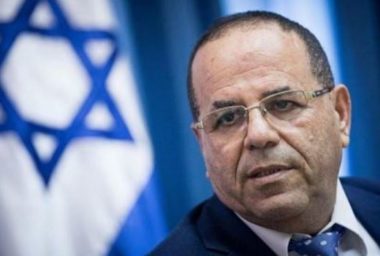 Former Israeli Communications Minister, Ayyoub al-Qarra, an Arab Druze member of Benjamin Netanyahu’s Likud Party, said that Israel was advancing its normalization ties with various Arab countries, and next year, Israelis will be able to open businesses and have normal political tries with Arab Gulf states.

The Maan News agency quoted al-Qarra stating that his recent visit to the United Arab Emirates was “great and historic,” and added that the normal ties between Israel, and these Arab states will be openly  declared after the United States presents its “peace plan.”

He added that he already started meetings and communications with senior political leaders in Bahrain and that the official declaration of this normalization was only delayed due to the corruption investigations into Israeli Prime Minister Benjamin Netanyahu, and the impeachment inquiry of U.S. President Donald Trump.

In an interview with i24news, al-Qarra said that the idea of a gas pipeline between Saudi Arabia and Israel is possible, and the Saudi monarchy is capable of implementing such a project, according to Maan.

He also said that the idea of the gas pipeline was first made by a Gulf state, without specifying which.

When asked about confirming a meeting took place between Netanyahu and the Saudi Crown Prince, Mohammad Bin Salman, the Israeli minister refused to answer, and only said that such issues are sensitive.

He also said that he is personally working with a state in the Gulf to arrange future visits by senior Israeli officials to Saudi Arabia and the Emirates, and added that “soon, Muslims with Israeli citizenship will be allowed to enter Mecca for pilgrimage using their Israeli-issued passports,” and citizens of these states will be able to visit “Israel, especially Jerusalem.”

Al-Qarra added that a prince from the United Arab Emirates recently visited Israel along with his wife, where she received medical treatment at an Israeli hospital.

He also said that he previously visited Qatar on behalf of the Netanyahu government, and held meetings with its senior political leaders.