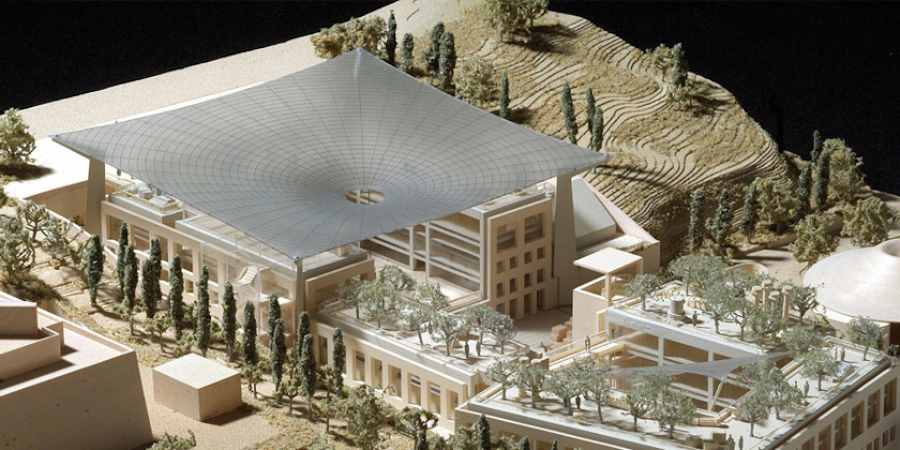 Israel illegally transfers rare archaeological artifacts from East Jerusalem into a new Israeli museum. Where is the international community?

The construction of Israel’s National Archaeology Campus (NAC), designed by architects Moshe Safdie and Irit Kohavi, has slowly but steadily progressed since 2012.

NAC will sit next to the Israel Museum and Bible Lands Museum in central West Jerusalem, on what Israelis call “Museum Hill.” The $104 million building spans 35,000 square meters and stands nine floors tall. Inside will be the offices of Israel Antiquities Authorities, storage for two million artifacts, laboratories, a library, as well as exhibition spaces.

Israeli authorities first started planning the new museum after the Oslo Accords were signed in 1993. It was envisioned as a way to transfer archaeological collections from the Rockefeller Archaeological Museum (RAM) in East Jerusalem to West Jerusalem, where NAC will be based.

It appears that this transfer process is picking up speed: Hava Katz, PhD in archaeology and chief curator of the exhibition, told the Israeli newspaper Haaretz that a Byzantine mosaic from Beit She’an Chapel was “brought” from RAM’s cellars and now is being installed onto the roof of NAC’s entry plaza.

No news yet has surfaced, however, on the status of the 100,000 rare books – some dating back to the 16th and 17th centuries – that Israel has also pledged to take from RAM and resettle in NAC.

The international community is apparently unaware of this impending, massive confiscation of artifacts belonging to a population living under military occupation – a clear violation of international law.

An Israeli organization, Emek Shaveh, tried to challenge the project as illegal in the Israeli High Court, but its petition was rejected. The court ruled that the Israel Antiquities Authority (IAA) has the right to move around Palestinian archaeological artifacts essentially as it wishes.

Inside the Rockefeller Museum in East Jerusalem. (Photo credit: Wikipedia)

RAM, the contents of which NAC is appropriating, was established during the British Mandate of Palestine. The British Empire viewed the museum as a part of its efforts to preserve archaeological findings in the countries it colonized for eventual nation-building projects (though, of course, only after Britain illegally “exported” most of such artifacts into its own institutions.)

RAM was named in 1925 when John D. Rockefeller Jr. donated two million dollars to it. The museum contains a huge collection of archaeological artifacts unearthed in excavations carried out in Palestine between 1920 and 1967, as well as a library containing thousands of rare books.

When Jordan assumed occupying authority over East Jerusalem in 1949, RAM was put under Jordanian control. It then shifted Israeli control when Israel occupied the area in 1967. In 1988, Jordanian-Israeli cease-fire agreements defined RAM and its contents as part of the cultural heritage of the Palestinian people as well as their future state. Consequently, though Israel has even long housed the IAA in RAM, the museum is protected by international conventions, including but not limited to the Geneva Conventions, The Hague Convention for the Protection of Cultural Property in the Event of Armed Conflict, the Convention on the Means of Prohibiting and Preventing the Illicit Import, Export and Transfer of Ownership of Cultural Property. All of these conventions forbid occupying powers from looting archaeological artifacts that belong to an occupied people or transferring them out of occupied territory.

Considering Israel’s many other illegal attempts to confiscate, destroy, or simply grossly neglect Palestinians’ historic cultural legacy, NAC’s function as an repository for stolen cultural treasures is unsurprising. Under these circumstances, UNESCO must recognize the urgent need to carry out a reactive monitoring mission beyond the Old City of Jerusalem and its walls. Otherwise, Israel’s already ruinous policy towards Palestinian antiquities, history, and culture will be increasingly manipulated or destroyed, at the same time as memories fade.