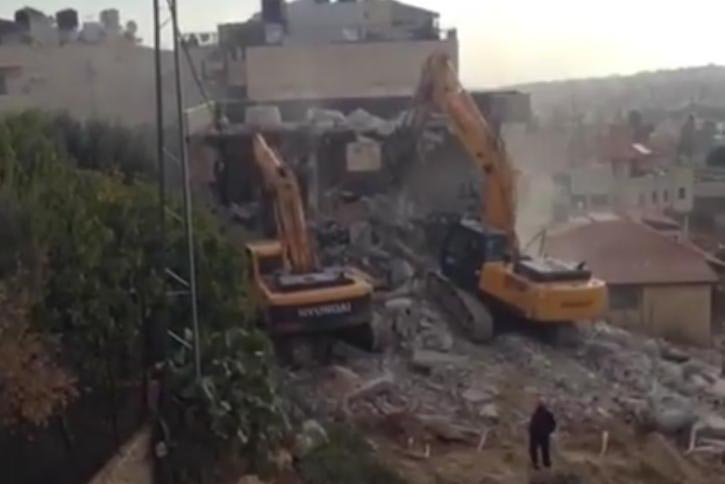 Israeli violations of international humanitarian law in the oPt continued during the reporting period (27 October – 02 November 2016).

(photo: On Wednesday, Israeli bulldozers demolished a 2-storey building belonging to the family of Thalji Soliman, in the Beit Hanina neighborhood, located at the center of occupied Jerusalem, under the pretext of building without a license.)

In the West Bank, Israeli forces killed two Palestinian civilians, including a police officer and wounded 4 others.  On 30 October 2016, Israeli forces killed Khaled Ikhlayel (22) from al-Badan neighbourhood, east of Beit Ummar village, north of Hebron when they opened fire at Polo car travelled by Ikhlayel.  The Israeli forces claimed that Ikhlayel deliberately ran over a number of Israeli soldiers, wounding one of them.  However, Ikhalyel’s father said to PCHR’s fieldworker that his son suffered a bad health condition due to neurological disorders and was released only two days before the incident happened from a Palestinian police prison for his health status.

In the same context, on 28 October 2016, 3 Palestinians from ‘Aida refugee camp, north of Bethlehem, were hit with metal bullets while participating in a protest in the vicinity of Belal Ben Rabah Mosque, north of the refugee camp.  The protesters threw stones and Molotov cocktails at the Israeli soldiers stationed there, so the latter fired rubber-coated metal bullets at them and chased them into the camp.  As a result, three of them were wounded.

On 30 October 2016, Israeli soldiers stationed in the vicinity of “‘Ofra” settlement, south of Silwad village, east of Ramallah, opened fire at a civilian car travelled by Ahmed Hamed (19) from the same village.  as a result, he was wounded with 3 bullets to the abdomen, arrested and then taken to Hadassa Hospital in occupied Jerusalem.  Israeli forces claimed that Hamed had sharp tools with him and intended to attack the Israeli soldiers.

In the Gaza Strip on 28 October 2016, Mohammed Abu ‘Ayadah (28) was hit with 2 bullets to the feet when Israeli forces stationed along the border fence, east of al-Shuja’iyah neighbourhood, east of Gaza City, opened fire and rubber-coated metal bullets at dozens of youngsters, who headed to Nahal ‘Oz, east of al-Shuja’iyah, to participate in activities in solidarity with Jerusalem.

In the context of targeting Palestinian fishermen offshore, on 29 October 2016, Israeli gunboats stationed off al-Wahah shore, northwest of Beit Lahia in the northern Gaza Strip, heavily opened fire at Palestinian fishing boats sailing within 2 nautical miles.  however, no casualties were reported.

On 30 October 2016, Israeli gunboats stationed off al-Sudaniyah shore, north of Gaza City, opened fire at Palestinian fishing boats sailing within 2.5 nautical miles.  As result, Rami Baker (38) was hit with a bullet to his right foot.

On 01 November 2016, Israeli gunboats Israeli gunboats stationed offshore, northwest of al-Wahah Resort, northwest of Beit Lahia in the northern Gaza Strip, opened fire at Palestinian fishing boats and then surrounded two of them sailing within 4 nautical miles.  6 fishermen who were on the boats were ordered by the Israeli naval soldiers to take off their clothes, jump into the water and swim towards the gunboat.  They were then arrested while their boats and 55 nets were kept in custody. at approximately 21:00 on the same day, the Israeli forces released the 6 fishermen through Beit Hanoun “Erez” crossing while the two boats are so far kept in custody.  Moreover, three of the fishermen were found wounded with rubber-coated metal bullets.

During the reporting period, Israeli forces conducted at least 60 military incursions into Palestinian communities in the West Bank and 11 others in occupied Jerusalem and its suburbs. During these incursions, Israeli forces arrested at least 70 Palestinian civilians, including 16 children and a woman. Twenty-two of them, including 13 children and a woman, were arrested in occupied Jerusalem.

In the context of house demolitions, on 02 November 2016, Israeli military vehicles demolished a residential building ready for inhabitation belonging to Thalji ‘Abdel ‘Aziz Soliman in Beit Hanina village, north of East Jerusalem, under the pretext of building without a license.  The 2-storey building comprised of 4 apartments was established on an area of 200 square meters.  The family said that the municipality did not give them any house demolition order or warning to demolish and emphasized that the family’s lawyer had been trying for months to obtain a license but in vain.

Settlement activities and settlers’ attacks against Palesitnian civilians and their property:

On 31 October 2016, Israeli forces demolished 4 dwelings, 7 sheep barns, 3 fodder stores and 3 toilets in addition to Feedlots, watering machines, tables and miliking machines in Kherbet al-Deir in the Northern Valley, east of Tubas.  That property belong to 3 families comprised of 13 members, including 4 children, living in the aforementioned area.

on the same day, Israeli forces demolished 5 tractors in al-Ras al-Ahmar area in the Northern Valley, east of Tubas.

At approximately 15:00, Israeli forces established a checkpoint on the bridge of ‘Atarah at the northern entrance to Birzeit, north of Ramallah. They stopped the cars, checked the civilians’ ID cards and then questioned them. At approximately 16:00, before removing the abovementioned checkpoint, Israeli forces arrested Mos’ab Mahmud Ahmed Abed Rabuh (35) from Tulkarm and took him to an unknown destination.

Esam al-‘Abbasi, Secretary of the Silwan Parents Committee, said to PCHR’s fieldworker that the Israeli forces raided the above-mentioned School, looking for a boy, who threw stones at them. Al-‘Abbasi added that the Israeli police summoned Saleh al-A’awar, the above-mentioned school principle, and Samer al-Ghoul, the principle of Silwan Primary School, to refer to Salah Eden Police Station after raiding the school.

Jadallah al-Rajabi, Qusai’s father, said to a PCHR fieldworker that a settler, who was in Butn al-Hawa neighbourhood, pushed Qusai to a wall and punched him in his eyes without a reason while Qusai was playing along with his cousins outside his house. As a result, the abovementioned child suffered pains and redness in his eyes. Jadallah said that Qusai came to the house crying and was afraid as the attack signs on his face were obvious. Jadallah mentioned that his son and friends assured him that the settler attacked Qusai, so he went to the place of attack where the abovementioned settler was with two other settlers. When Jadallah asked the settler why he attacked his son, the latter staryed shouting and pointing his weapon at Jadallah. Meanwhile, an Israeli infantry passed by the area, so Jadalah told him about what happened to his child.  the Israeli soldiers detained the settler and took him to Salah Eden Police Station. Jadallah added that he filed a complaint in the abovementioned police station and took his son to a medical centre to make the necessary tests for Qusai. It should be noted that Jadallah had filed a complaint 6 months ago against the same settler, who attacked Qusai, but to no avail.

Riyad Suleiman, son of Thalgi, said to PCHR’s fieldworker that at approximately 04:00, Israeli forces accompanied with two heavy bulldozers surrounded the 2-storey building built on an area of around 200 square meters. At approximately 06:00, they demolished the building. Riyad mentioned that his father established the building comprised of 4 apartments ready for inhabitation for himself and his sons. It should be noted that that the family did not receive any demolition notice or decision from the Israeli municipality. He emphasized that the family’s lawyer had been trying to obtain a construction license for the building for months, but they were surprised with the demolition. He added that the village inhabitants informed them on the abovementioned day evening that the Israeli forces moved into the area surrounding the house and had files and cameras in an attempt to pave the way for the bulldozers to carry out the demolition.

Fully detailed document available at the official website of the Palestinian Center For Human Rights.