PPS: “Army Kidnaps 24 Palestinians, Including Eight Family Members And A Journalist, In Jerusalem” 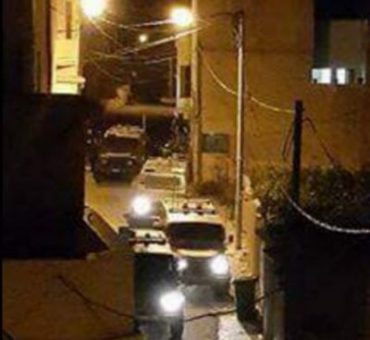 The Palestinian Prisoners’ Society (PPS) has reported that Israeli soldiers have kidnapped overnight and at dawn Thursday, 24 Palestinians, including a journalist and eight family members, and a journalist, in different parts of the occupied West Bank.

The PPS said the soldiers searched and ransacked many homes in the Ramallah district, in central West Bank, and kidnapped nine Palestinians, including an entire family from al-Am’ari refugee camp.

The kidnapped have been identified as Zohdi Abu Shousha, his wife Jihad, and their sons Mahran, Ehab, Mohammad, Fadi, Baha’ and Thieb, in the al-Am’ari refugee camp.

In Qalqilia, in the northern part of the West Bank, the soldiers kidnapped Mos’ab Ma’zouz Dallal, 27, and his brother Mohannad, 23.

In Salfit, the soldiers kidnapped a journalist, identified as Khaled Ma’ali, while resident Mohammad Ahmad Mahdawi was kidnapped, on Thursday at night, in Tulkarem, in the northern part of the West Bank.