MADA: 107 Violations Against Media Freedoms in Palestine During October 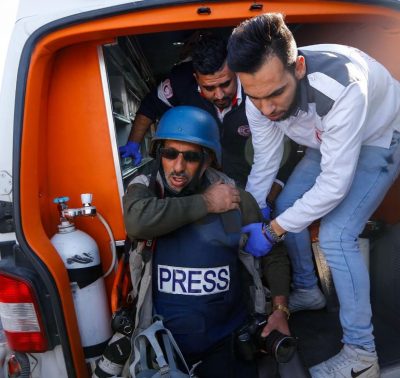 October 2019 witnessed a significant rise in the number of violations against media freedoms in Palestine, PNN reported. These violations represent double the amount witnessed during September.

The Palestinian Center for Development and Media Freedoms (MADA) has documented a total of 107 attacks against media freedoms in the West Bank and Gaza Strip, committed by Israeli and Palestinian authorities in addition to the Administration of Facebook, during October, compared to a total of 53 during September.

This rise was mainly attributed to the decision to close dozens of websites and Facebook Pages, in addition to the ongoing violations by the Facebook Company, which led to closing more Palestinian pages claiming that they violate “the Facebook community standards.”

The number of Israeli violations has nearly doubled during October, totalling 27 attacks, compared to a total of 14 attacks during September.

As usual, most of the Israeli violations fall under the serious attacks against the lives of Palestinian journalists and media freedoms. The attacks included a total of 12 assaults which varied between beating, and other physical injuries due to the Israeli occupation forces’ rubber bullets and tear-gas canisters which are aimed at male and female Palestinian journalists covering various events across the occupied West Bank and Gaza Strip.

In addition to 12 assaults, were 5 cases of arrest and detention.

Rami Mahfouth Al-Khateeb – cameraman and journalist, was assaulted and prevented from photographing.

Mohammad Radie – Palestine TV cameraman, was injured by a rubber bullet to the knee, while covering a military incursion into Ramallah.

Mutasem Saqf Alhait – was injured by a rubber bullet in the flank while documenting a military incursion in Nablus, was also assaulted while covering a march against settlement expansion in Turmus ‘Ayya near Ramallah.

Osaid Mohammad Sbaih – Palestine TV reporter, was prevented from documenting, and was threatened with tear-gas canisters.

Mohammad Dahlan – was injured by a rubber bullet that struck, and damaged his camera.

It should be mentioned that the Israeli occupation forces confiscated filming equipment while the journalists were covering a peaceful protest against settlements in the northern Valleys, east of Tubas.

Additionally, the following six Palestinian journalists were assaulted and beaten by the Israeli occupation forces while covering a sit-in in solidarity with the prisoners on hunger strike.

October 2019 witnessed a significant increase in the number of Palestinian violations, most of which was due to the decision, by the Palestinian Authority to block dozens of news websites and media pages on Facebook, based on the Cybercrime Law.

The total number of Palestinian violations during this month reached 61 attacks; 49 of which were a result to the decision to block media websites and pages. This decision was considered a setback for the Palestinian government, which, since its inauguration last April, has promised to be committed to protecting media freedoms.

The other 12 Palestinian violations documented in addition to the practices of blocking websites included the detention and prevention from coverage of the reporter of Sawt Al-Shaab Radio, Mahmoud Omar Allouh, by Hamas police officers. Moreover, the journalist Izz Al-Deen Yasser Abu Aisha was summoned four consecutive times for several hours each and assaulted by the Internal Security Services.

The Preventive Security Services arrested and detained journalist Mahmoud Abu Hassan, in Tubas, for 15 days before being released on condition of bail.

The Preventive Security Services in Nablus arrested and detained journalist Radwan Abdelqader Qatanani, for seven days before being released on condition of bail, summoning him twice after his release.

The Internal Security of Hamas Government arrested journalist Bassam Mohammad Muhaisen, and he is still being detained, and finally Ziad Awad, who was summoned and detained for 10 hours. 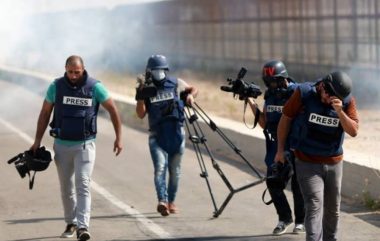 During October, Facebook continued to close more pages of Palestinian journalists and media websites, claiming that they violated the “standards of Facebook community” as stated in some notices that have been received.

The blocking practices or the prevention of live broadcasts, included a total of 19 pages for Palestinian journalists and media websites with thousands of followers.

This is in addition to blocking and prohibiting more pages belonging to Palestinian citizens (not journalists). During September, Facebook either fully or partially blocked a total of 34 Palestinian journalism and media websites.