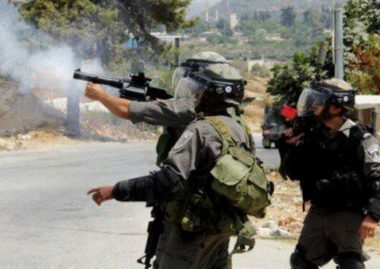 Israeli soldiers attacked, Friday, the weekly nonviolent protest against the Annexation Wall and Colonies, in Kufur Qaddoum, east of Qalqilia, in the northern part of the occupied West Bank, causing at least ten to suffer the severe effects of tear gas inhalation.

Morad Eshteiwy, the media coordinator of the Popular Committee against the Wall and Colonies in Kufur Qaddoum, said the soldiers invaded the town, and fired many gas bombs and concussion grenades on the protesters, causing at least ten to suffer the severe effects of tear gas inhalation.

He added that the invasion led to clashes between the soldiers and local youngsters, who hurled stones on the military vehicles.

The procession started peacefully from the center of Kufur Qaddoum, and was held by dozens of locals, accompanied by Israeli and international peace activists.