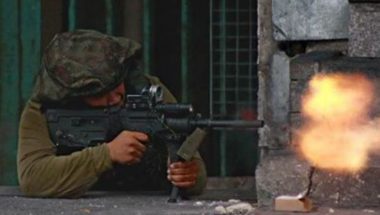 Israeli soldiers invaded, late on Friday at night, Deir Abu Mashal village, west of Ramallah, after besieging it for several hours, leading to clashes with local youngsters, before shooting three Palestinians with live rounds, and causing many to suffer the effects of teargas inhalation.

Update: The soldiers broke into, and violently searched the homes of the three Palestinians, who were killed in Jerusalem, friday, and verbally informed the families that the army will be demolishing their homes soon.

Emad Zahran, the head of Deir Abu Mashal Local Council, said the soldiers closed all roads leading to the village, starting late at night Friday, and installed an iron gate, sealing the main entrance, and prevented the Palestinians from entering or leaving it.

He added that the soldiers clashed, at dawn Saturday, with dozens of local youngsters, who hurled stones and empty bottles, while the army fired live rounds, wounding three Palestinians, in addition to firing rubber-coated steel bullets and gas bombs, causing scores of residents to suffer the severe effects of teargas inhalation.

Mashal said that the Palestinian Civil Affairs Office, managed to enable 41 high school students to leave the village, after coordinating with the Israeli District Coordination Office, to allow the students to attend their final exams.

Furthermore, the soldiers condiscated 40 Palestinian cars, some of them without valid licence plates, and distributed leaflets warning that the military will conduct repeated invasions and searches of homes, and will keep the siege imposed on tghe village.

The siege and invasion into Deir Abu Mashal came hours after three young men from the village were shot and killed in occupied Jerusalem, Friday, after attacking Israeli officers, killing one.

The three have been identified as Bara’ Ibrahim Ata, 18, Osama Ahmad Ata, 19, and Adel Hasan Ankoush, 18.

The slain Israeli officer has been identified as Hadas Malka, 23; Israeli daily Haaretz said the officer was stabbed while trying to reach for her gun.