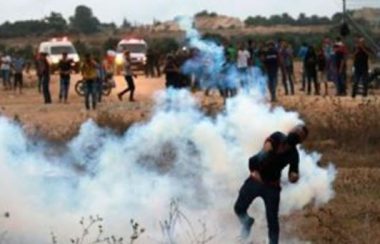 Israeli soldiers attacked, Friday, many Palestinian, Israeli and international peace activists, holding the weekly nonviolent protest against the Annexation Wall and colonies, in Ni’lin village, west of the central West Bank city of Ramallah, and abducted one Palestinian.

Mohammad Amira, a member of the Popular Committee against the Wall and Colonies in Ni’lin, said the soldiers resorted to excessive force against the nonviolent protesters, and fired rubber-coated steel bullets, gas bombs and concussion grenades, just as the protesters reached the Wall, isolating the villagers from their lands.

The attack did not lead to injuries among the protesters, while the soldiers abducted, earlier, a man identified as Abed Ayed Srour.

Amira added that a number of local youngsters managed to climb the Wall, and raised a Palestinian flag.