Many Palestinians Suffer Effects Of Teargas Inhalation Near Hebron 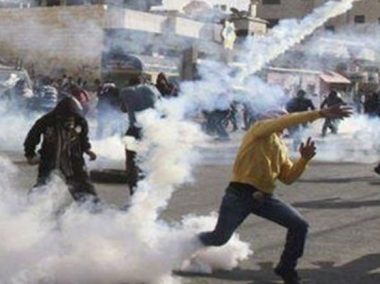 Israeli soldiers attacked, Friday, dozens of Palestinians, after the army invaded Safa area, in Beit Ummar town, north of the southern West Bank city of Hebron, causing many to suffer the effects of teargas inhalation.

The incident led to confrontations between the soldiers and local youngsters, before the army fire gas bombs and concussion grenades, causing man many Palestinians suffered the effects of teargas inhalation.

Earlier on Friday, the soldiers attacked a nonviolent Palestinian protest in Qalqas area in Hebron city, causing many to suffer the effects of teargas inhalation.

In the Gaza Strip, the soldiers killed a teenage boy, identified as killed Bilal Mustafa Khaffaja, 17, and injured at least 210 others, during the Great Return March processions, in several parts of the besieged coastal region.