Many Palestinians Suffer The Effects Of Teargas Inhalation Near Hebron 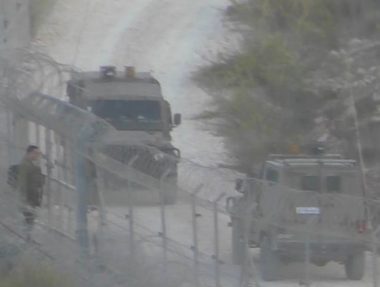 Israeli soldiers invaded, on Wednesday evening, Beit Ummar town, north of the southern West Bank city of Hebron, and fired many gas bombs and concussion grenades at homes, and several youngsters, who hurled stones at the advancing army jeeps, causing many Palestinians to suffer the severe effects of teargas inhalation.

Media sources in Hebron said the invasion was focused in the ath-Thaher area, south of Beit Ummar, close to Karmie Tzur illegal colony, which was built on illegally-confiscated Palestinian lands.

The sources added that the soldiers also invaded and searched many homes in the area, and occupied several rooftops, before using them as monitoring towers and firing posts.

Furthermore, one of the soldiers, stationed on the rooftop of one of the invaded homes, was mildly injured in his face by a stone hurled by one of the protesters.

In addition, the soldiers invaded an area, near the Somoud Mosque, in the town, before later withdrawing to their base in Karmie Tzur.