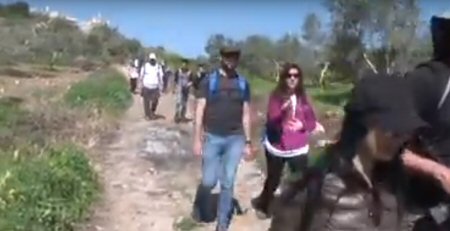 During its 330 kilometer hike that starts from Jenin, northern West Bank, to Hebron in the south, tourism experts have called on adopting Masar Ibrahim’s Thru Hike as a national touristic and environmental trail, to strengthen national Palestinian tourism as Israeli occupation continues to claim Palestinian sites as its own.

“Thru Hike”, a trail which was organized by the Masar Ibrahim Al-Khalil organization, is a 21-day hike which starts from Rummana village in Jenin, and ends in Beit Marsam village south of Hebron, aims to strengthen the internal tourism in Palestine and explore its nature and sites, in an attempt to protect Palestine’s national tourism, culture, historic sites, heritage and beauty.

According to the PNN, Masar Ibrahim’s communications manager, Ghaida Rahel, said that the hike is organized twice a year with dozens of participants, and called on the Palestinian Ministry of Tourism to adopt the trail as a national track for several reasons, the most important of which is that there are Israeli attempts to distort the facts by having Israeli companies bring tourists to the West Bank under claims that they are Israeli sites against international law.

The tour guide for Masar Ibrahim, Zaid Azhari, said that the hike promotes sustainable community tourism, which provides different opportunities for citizens to take part in awareness activities to protect the nature of the country.

For his part, Majdi Shilleh from Nablus said that the trail is an opportunity to celebrate the spring season  and use hiking as an adventure, sport and as an educational activity.

The villages through which the trail went through welcomed the participants, saying they will open their homes to the new visitors since it could symbolize awareness and knowledge in the Question of Palestine.

Hossam Sabihat, a citizen from the village of Rummaneh, pointed to the importance of Masar Ibrahim for the village, since it was cut off by the separation wall, which harmed the economy and social life of its citizens, therefore, it is important to attract tourists to the area to bring attention to its case.