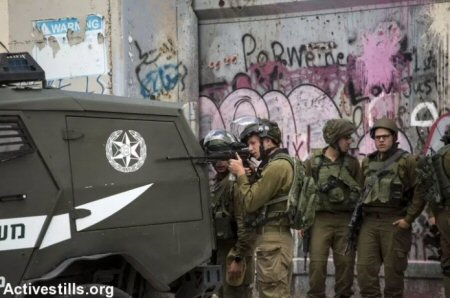 In May 2018, Israeli occupation forces arrested 605 Palestinians from the West Bank, Gaza and Jerusalem, including 94 children and nine women. Occupation forces seized 197 Palestinians from the city of Jerusalem, 104 from Ramallah and el-Bireh, 70 from al-Khalil, 33 from Jenin, 44 from Bethleheme, 48 from Nablus, 15 from Tulkarem, 32 from Qalqilya, 5 from Tubas, 20 from Salfit, 8 from Jericho and 29 from the Gaza Strip.

In addition, the Israeli occupation forces issued 83 administrative detention orders in May 2018 for the imprisonment of Palestinians without charge or trial. 36 of these were new orders and the remainder were renewals of existing detention orders. There are approximately 6000 Palestinian prisoners in Israeli jails, including 54 women and six minor girls. There are approximately 350 Palestinian children in Israeli jails and 430 Palestinians jailed without charge or trial under administrative detention.

The cases of the martyr Aziz Aweisat and Hassan al-Tamimi: Crimes of the Israeli prison administration

Aziz Aweisat, 53 years old and from Jabal al-Mukabber in Jerusalem, was brutally assaulted by Israeli occupation forces inside prison. He was subject to a beating inside his cell at the Eshel detention center before being transferred in the “Bosta,” according to one of the prisoners who was with him on 7 May 2018.

On 9 May 2018, two days later, Aweisat suffered a heart attack at the Ramleh prison clinic. He was taken to the Israeli Assaf Harofeh hospital in a very serious condition until he died on 20 May 2018. Israeli occupation authorities have refused to release his body. He was serving a 30 year prison sentence and has been detained since 2014.

Hassan al-Tamimi, 18, from the village of Deir Nizam, lost his sight completely after being subject to medical neglect by the Israeli prison administration since his detention on 7 April 2018. Al-Tamimi has suffered from kidney and liver problems that affect his ability to absorb proteins since childhood. He requires specific treatments and a specialized diet, which were denied to him by the prison administration, causing his health to deteriorate by late May. He was later transferred to the Shaare Tzedek hospital in Jerusalem and has reportedly lost his sight completely. In this context, the Israeli occupation authorities decided to release him in an attempt to evade responsibility for his health and life.

Invasions and attacks during arrest raids

Israeli occupation forces stormed a home with a troop consisting of 30 military vehicles, accompanied by a bulldozer and a “skunk water” vehicle, in al-Amari refugee camp on Monday, 28 May 2018. They surrounded a home for over five hours and seized 15 young people. The Israeli attack on the entrance to the camp caused the injury of 13 young people, according to the Palestinian Ministry of Health.

In this context, we present the testimony of Mr. Jamal Suleiman Eid, 56, the father of the detainee Iyad Eid, who said: “At about 6:15 am, we woke up to the shouts of the army. After a few minutes, we heard a scream from my sister’s house, adjacent to our hose. After a while, they broke down the door of our home and attacked my son Iyad. One of the soldiers put his hand over Eyad’s mouth. He started shouting and asked them to move away from him because he is sick, but the soldiers did not respond to him and they beat him in front of me. There were about 15 soldiers inside. They then took both of us with our hands behind our backs with plastic restraints, and took us to a room on the ground floor of the building. There, I also found my nephews, Firas and Louay, blindfolded and restrained.”

The Israeli army’s extensive arrest campaigns against Palestinian civilians and attacks on detainees and their families during the arrest process are an integral part of the policy of collective punishment practiced by the occupation forces, which is fundamentally contrary to articles 33 and 34 of the Fourth Geneva Convention. The occupation’s practices aim toward punishing all of the people of the camp, disrupting their lives and imposing harsh conditions on all citizens, including women, children and elders.

According to the monitoring and documentation departments of the Palestinian human rights institutions, the increasing number of complaints by child prisoners in the Ofer and Megiddo prison stems from a deliberate policy of repression adopted by the “Nachshon” forces in beating and torturing them during their transfer from one prison to another or to or from the courts. Lawyers’ visits to child detainees during the month of May confirmed the increase in complaints and visible signs of attacks on their bodies during the visits.

The “Nachshon” forces are special units that wear a distinctive uniform. They include soldiers with high levels of physical strength and experience through serving in different military units within the occupation army. They are placed in special centers and summoned if there is a protest inside the prisons. Their most important tasks are the transfer of prisoners from one prison to another and from prison to the courts, in addition to transferring sick prisoners and controlling the prisons. The prison administration uses these units to suppress prisoners and force them to carry out their orders.

The prisoners’ institutions highlighted that the occupation bears full responsibility for the deterioration of the situation in occupied Palestine. The practices of the occupation and its settlers are the cause of this deterioration, especially the excessive use of force against demonstrators in the Gaza Strip, the attacks on the families of Palestinian prisoners during their detention, home demolitions, large-scale arrests and extrajudicial execution of Palestinians and attacks on Palestinian civilians in their homes and workplaces.