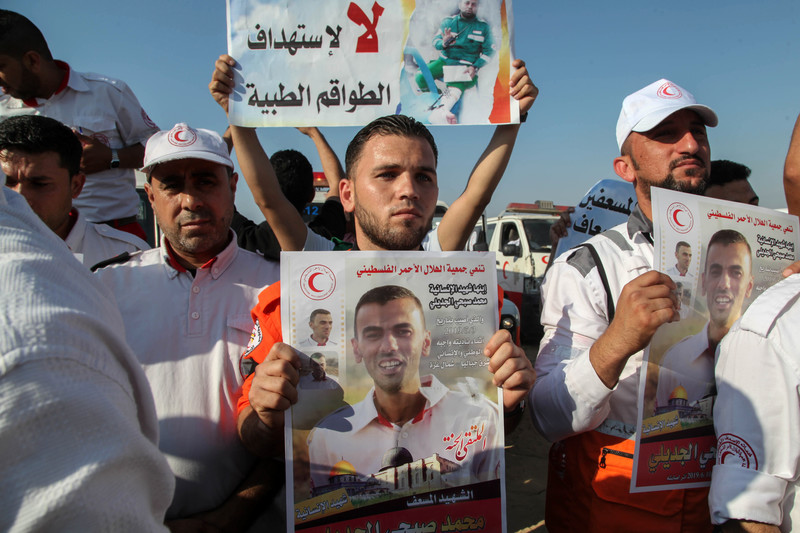 Hamza Abu Eltarabesh is a journalist from Gaza.

Nobody in Gaza is exempt from being an Israeli target. Luck is the only thing that saves anyone here from being killed.

The medic Muhammad al-Judaili ran out of luck.

On 3 May, he was working at the Great March of Return – weekly protests to demand that the rights of Palestine’s refugees be fully respected. He was next to an ambulance parked approximately 100 meters from the fence separating Gaza and Israel when he saw that a child had been shot in the arm.

Muhammad rushed toward the child, with the intention of administering first aid. Before he could do so, Muhammad had himself fallen to the ground. An Israeli sniper had shot him in the nose with a rubber-coated steel bullet.

He was taken to al-Quds hospital in southern Gaza, where he had previously worked. After three weeks, he was discharged so that he could celebrate Eid with his family in al-Bureij refugee camp.

While he was in his apartment, Muhammad lost consciousness. He was brought back to the hospital, where his heart stopped for minutes.

Although doctors succeeded in reviving his heart, he remained in a coma. His medical team was concerned that his brain would be damaged as a result of his injury.

On 4 June, Muhammad was transferred to al-Ahli hospital in Hebron, a city in the occupied West Bank. Six days later, he died. He was 36 years old.

“I never expected to be a widow and have the burden of raising four children alone,” said his wife Muna Shurrab. “Muhammad had a big heart that loved us all.”

Muhammad’s 10-year-old son Adel recalled how they had gone shopping together at Eid.

“We were very happy,” Adel said. “We thought we had our normal life back.”

Muhammad was the fourth medic in Gaza to have been killed since the Great March of Return began last year.

One such killing – that of the nurse Razan al-Najjar – received some coverage in the international media.

Yet the violence inflicted by Israel on medics has generally been met with indifference by Western governments.

Gaza’s health ministry argues that the killing of medics has been deliberate. Ministry spokesperson Ashraf al-Qedra said Israel aimed at the victims “directly in the head or chest.”

Ahmad Abu Foul witnessed the shooting of his colleague Muhammad al-Judaili. The two men had worked together on numerous occasions.

When Abu Foul was injured by Israel during Operation Cast Lead – a major attack in late 2008 and early 2009 – it was Muhammad who gave him first aid.

Abu Foul has himself been wounded four times since the Great March of Return began last year. One week before Muhammad received his fatal injury, Abu Foul was shot in the leg.

Despite the danger that he faces, Abu Foul has pledged to continue his work. “It’s a duty,” he said. “I don’t deserve to be killed for doing what I do.”

He was also part of a medical crew targeted with a missile fired from an Israeli drone during Israel’s 51-day assault on Gaza at this time five years ago. “It is a miracle that we survived,” he said.

Ali Saqir, a shoe shop owner, was a neighbor and close friend of Muhammad al-Judaili. He recalled Muhammad’s bravery during Israel’s 2014 attack.

When al-Bureij camp came under Israeli fire, Saqir called Muhammad asking for help in evacuating its residents. Although Muhammad was working in another part of Gaza at the time and road journeys were extremely dangerous, he insisted on bringing an ambulance to al-Bureij so that he could aid his neighbors.

On another day during the 2014 attack, Muhammad was working in the Beit Hanoun area of northern Gaza. Israel had destroyed homes in the area and many of those displaced had gathered around an ambulance in desperation.

The Israeli forces ordered that the people move away from the ambulance. But Muhammad disobeyed the order and drove away quickly, the ambulance full of people.

As the ambulance departed, the Israeli forces fired a missile in its direction. “Luckily, Muhammad managed to swerve away and he survived, along with his passengers,” said Saqir.

“The first time I felt helpless”

The fifth anniversary of the 2014 attack brings back painful memories for Gaza’s medics.

In total, 23 Palestinian health workers were killed during that offensive, 16 of them while on duty. The medics who survived have, in many cases, had to cope with bereavement.

Basem al-Batsh works for Gaza’s civil defense department. Late in the evening of 29 July 2014, he received a phone call to say that Israel was bombarding Jabaliya refugee camp, where he lived.

Basem set out for home. Yet when he got to the entrance of his neighborhood, it was impossible to venture any farther.

Israel was firing missiles “at everything that moved,” he said. “I could see my family running in the street, fleeing the house.”

The extended al-Batsh family lived in a multi-story building. As they tried to escape, the Israeli forces attacked them.

Five members of the family were killed. Among them were Basem’s mother Halima. “I watched my mother dying,” he said. “At that moment, Israel killed me as well.”

Once he felt safe enough to move, Basem took his mother’s body and placed it in the back of the ambulance.

“I sat in the front seat and couldn’t look in the back at my mother’s body,” he said. “It was the first time I felt helpless. I’m a paramedic and a civil defenseman, who couldn’t save the life of his mother.”