Ministry of Education: Detention & Interrogation of Children a Crime against Humanity 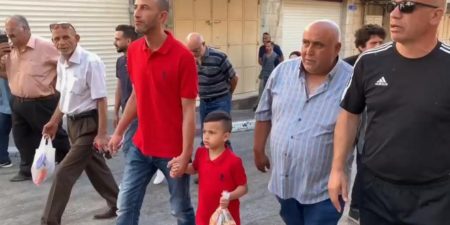 photo: Muhammad Elayyan (4) was summoned to interrogation by the Israeli police for “throwing stones at Israeli soldiers”.

The ongoing Israeli¬† detention and interrogation of Palestinian children are crimes against humanity, the Ministry of Education (MoE) said, in a statement, on Tuesday.

The Ministry pointed out that such practices represent a flagrant violation of international conventions, specifically Article 16 of the Convention on the Rights of the Child which states: ‚ÄúNo child shall be subjected to arbitrary or unlawful interference with his or her privacy, family, home, or correspondence, nor to unlawful attacks on his or her honor and reputation.‚ÄĚ

The Ministry added that the scene of summoning the child Muhammad Elyyan, from the town of al-Eesawiyya, for interrogation, is disgraceful and reflects the brutality of military occupation and reveals its blatant violation of all rights and conventions and human values.

It also drew attention to the harsh psychological effects of arrests and detentions of children in poor health conditions, stressing that the continued violations of the Israeli occupation, against Palestinian children, come as a result of international silence on these criminal practices.

The Ministry renewed its demand that all local and international human rights, along with humanitarian and media institutions, bear the responsibility of putting an end to these violations, and hold occupation authorities¬† accountable for the escalating crimes against the Palestinian children.