Ministry of Health: 131 Palestinians Killed, Over 14 Thousand Injured in Great March of Return 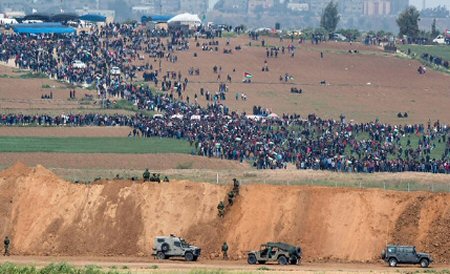 The Palestinian Ministry of Health (MOH) in Gaza has issued an updated count of Palestinian casualties since the “Great March of Return” began on March 30th, in the besieged Gaza Strip.

The Ministry announced, late Sunday, that the total number of Palestinians killed by Israeli forces is 131, including 15 children and a woman, since the weeks-long massive demonstrations began.

The total number of injuries and gas inhalation was 14,811, of which 6,836 were treated in the field at medical points and 7,775 were treated in hospitals. Among the injured were 2,525 children and 1,158 women, according to the statement.

The ministry said that two paramedic, including a female paramedic were killed, and 229 medics were injured with live ammunition and tear-gas suffocation, while 39 ambulances were partly damaged.

Meanwhile, the Forum of Palestinian Journalists in the Gaza Strip said that two journalists, Yasser Murtaja and Ahmad Abu Hussein, were killed during the protests.

The forum added that 175 journalists were injured since the beginning of the marches.