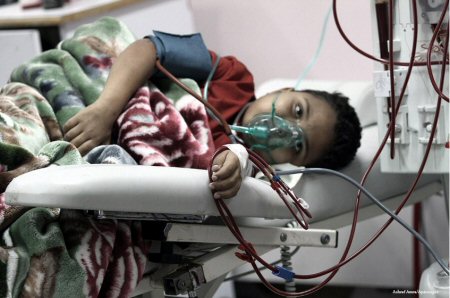 The Ministry of Health, today, reiterated its rejection of the establishment an American field hospital in the north of the Gaza Strip, warning of the existence of dubious intentions behind it, while considering it an attempt “to whitewash the Israeli occupation, whose hands are covered with Palestinian blood,” and a step to further separate the Gaza Strip from the West Bank.

The Ministry said, in a statement, that “this project seeks to achieve Israeli goals aimed at liquidating the Palestinian cause and fragmenting it, and to create additional justifications for the creation of a mini-state in the Gaza Strip at the expense of Palestinian history and rights.”

It said: “The objectives of this project are known to everyone who can see and think. Israel is the first and last beneficiary, as it will prevent Palestinian patients from reaching hospitals in the West Bank and Jerusalem, for treatment.”

The Ministry of Health condemned the claim by the de facto authority in the Gaza Strip, Hamas, that this project has no political connotations, stressing that it was part of a political agreement between Hamas, Israel and the US.

It wondered, “Why would the United States, which has cut off support for hospitals in occupied Jerusalem threatening as a result the lives of Palestinian patients, support the establishment of a hospital in the Gaza Strip, unless its real purpose behind it is to harm the Palestinians and harm and destroy their rights?”

It said “the attempt by the de facto authority in Gaza to claim that the project was a support from an ‘American institution’ to divert attention from the US administration’s support for it, is nothing but a failed attempt to get out of this impasse. Any project implemented by any American institution must first get the blessing and approved of the White House.”

The ministry said, according to WAFA, that “if this project was an innocent one and aims to serve our people, why not develop the existing Gaza Strip hospitals located in all areas of the Gaza Strip, and not in the northern Gaza Strip under the pretext of ‘facilitating the movement of its employees to enter and exit from the territory of 1948 (Israel)’? Is the facilitation of entry and exit of staff, who we do not know anything about their qualifications, nationalities, affiliations and goals, more pressing than facilitating the arrival of patients to the hospitals?”

It added: “If this project was so innocent, why is it being planned in secret without the knowledge of the Ministry of Health, which has carried out projects in the hundreds of millions (of dollars) in the Gaza Strip with the support of the Arab brothers, donor countries and international organizations, and why is this particular project kept secret while hiding the identity of the hospital operator and its staff, especially after the de facto authority in Gaza said that its staff will come to the hospital and leave it to the 1948 territory?”

The Ministry of Health says that it is doing all it can, despite the financial crisis it is facing, to meet the needs of the people in the Gaza Strip, and especially its various health centers.