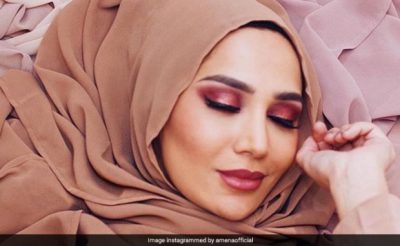 Amena Khan, a model who has worked for L’Oreal since 2016, was fired Monday from an ad campaign after images of her wearing a hijab took off on social media. After the campaign went viral, the right-wing U.S. blog site ‘Breitbart’ claimed to have uncovered tweets that Khan had made in 2014 that they considered ‘anti-Israel’.

Even after she publicly apologized for the old tweets, she was still fired from the campaign. She said in her apology that “championing diversity is one of [her] passions” and that her past tweets “do not represent the message of harmony that[she] stands for”.

Critics of the firing of Amena Khan point out that she appears to be the latest target of a smear campaign that labels criticism of Israeli policies as ‘anti-Semitic’. Other targets have included academic Steven Salaita, Australian professor Jake Lynch of Sydney University, Pink Floyd musician Roger Waters, Paul Hadweh of UC Berkeley and many others.

The tweets in question were sent in July of 2014, at the height of Israel’s bombing and ground invasion of the Gaza Strip that resulted in the deaths of more than 1400 Palestinians, many of whom were children.

At that time in 2014, every day more pictures appeared on the news, and on social media, of the mutilated bodies of children who had been bombed and shelled by Israeli weaponry. But even in the midst of the violence of the Israeli invasion of Gaza, Khan’s tweets focused on the Israeli attacks, and did not generalize about Jewish people or make false accusations.

Instead, the ‘controversial tweets’ were ones in which Khan tweeted things like a response to British journalist Jon Snow of Channel 4 News in England, saying that his piece of the ‘Children of Gaza’ was “very moving” and criticized Israel for killing innocent children.

In that news report, prepared upon Snow’s return from the Gaza Strip, “The average age is 17 – about a quarter of a million people in Gaza are under 10. And if you know any 10 year olds, 7 year olds, 5 year olds, that the idea that you can control your children in a war zone to keep them from harm – is impossible. So that in a very densely-packed urban area, if you decide to shell it, you will kill children.” Here is a link to the full report by Jon Snow in 2014. 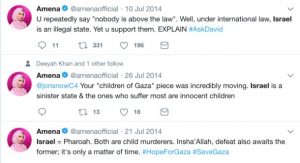 Khan herself has in the past been criticized for working with L’Oreal, a company that has been targeted by the Boycott, Divestment and Sanctions movement for its factory in the illegal Israeli settlement colony of Migdal Ha’emek, a colony which discriminates against Palestinian citizens of Israel, denying them the right to buy, rent or live on any part of the town, simply because they are “non Jews.”

Now, many of her fans are challenging L’Oreal on their decision to force the model to step down. Her Instagram and Twitter accounts are full of comments demanding her return to the campaign, and challenging the ‘censorship of political views’ being practiced by the company.