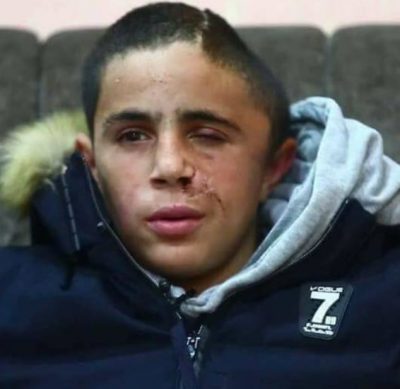 Mohammed Fadel Tamimi, 15, from Nabi Saleh village, northwest of Ramallah, and who was detained by the Israeli army on Sunday, was released several hours after his detention, according to Bilal Tamimi, an activist in the anti-settlements committee in the village.

He told WAFA, on Monday, that the army freed the boy after it was clear his health situation does not permit holding him, and turned him over to the Palestinian liaison office.

Mohammed Tamimi was shot in the face by a rubber-coated metal bullet fired by Israeli soldiers in his village, in December, causing him serious damage to his skull that required surgery and removal of a part of the skull.

Soldiers detained Mohammed Tamimi at the entrance to his village, and took him to a police station at Benyamin detention center, in the occupied West Bank.

He is a cousin to Ahed Tamimi, an icon of Palestinian peaceful resistance, who was detained when she was only 16 years old, for slapping an Israeli soldier who raided her family home in Nabi Saleh, and was later sentenced, along with her mother, Nariman, to eight months in prison for humiliating a soldier.