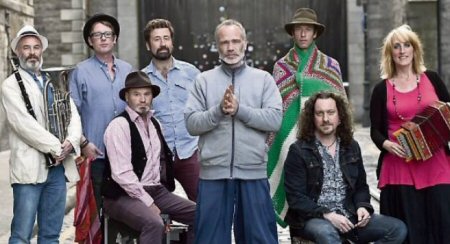 The Irish Campaign to boycott the Eurovision Festival in Israel, 2019, has secured the support of a further 20 public figures, including actor Stephen Rea and musical artists Mary Coughlan, Luka Bloom and the members of Kíla, and have called on RTÉ not to participate and for musicians not to make submissions to the contest,  the Ireland Palestine Solidarity Campaign said, in a press release. The news comes just days after the Irish National Broadcaster RTÉ announced its call for entrants for the song contest.

PNN reports that the Irish campaign, part of a widely supported international one, handed in a petition of over 11,000 signatures calling for a boycott during a meeting with RTÉ Director General Dee Forbes on the 26th of September. It stresses that participation in Eurovision 2019 would be unconscionable due to Israel’s oppression of the Palestinian people. The campaign has gathered much traction and broad support from human rights activists, artists and other public figures, among them former Eurovision winner Charlie McGettigan; Irish broadcaster and former Eurovision commentator Mike Murphy; former Eurovision presenters Carrie Crowley and Doireann Ni Bhriain, who believe that Israel’s hosting of the competition will be used to ‘culturewash’ and ‘pinkwash’ that state’s decades long series of gross violations of the human and civil rights of the Palestinian people. The Musicians’ Union of Ireland (MUI) and Irish Equity, have also endorsed the campaign. Over 60 public figures have endorsed the campaign since June.

On September 7th, over 140 international and Irish artists signed a letter to the Guardian in support of boycotting the Eurovision in Israel stating: “Until Palestinians can enjoy freedom, justice and equal rights, there should be no business-as-usual with the state that is denying them their basic rights.”  Among the signatories are Brian Eno, Christy Moore, Mary Black, Robert Ballagh, The Knife, Wolf Alice, Ken Loach, Mike Leigh, Moddi, Alia Shawkat, Roger Waters, Alexi Sayle, Julie Christie, AL Kennedy and Nick Seymour of Crowded House.

Speaking on behalf of the Ireland Palestine Solidarity Campaign (IPSC), Zoë Lawlor said: “You would think any musician would be happy to be in such stellar company, on the right side of history, especially when the alternative is to ignore the heartfelt appeal from an oppressed people. Indeed, not only would performing in the Eurovision in Israel be a betrayal of the Palestinian people, but has the potential to be very damaging to an artist’s career.”

“In the same way that playing in apartheid South Africa is viewed as shameful, no-one wants to be remembered for crossing the Palestinian picket line, especially as thousands of people protesting for their legally guaranteed Right of Return in Gaza have been shot down by Israeli soldiers who have killed more than 180 people, paramedics, journalists and children, over the last six months,” Ms. Lawlor continued.

Lawlor said: “The more than 630 cultural workers who have signed the Irish Artists’ Pledge to Boycott of Israel and the more than 11,000 people who have signed the petition calling for Eurovision 2019 to be boycotted testify to the public mood in Ireland and the empathy that exists here for the Palestinian people. What artist would want to tarnish their reputation by ignoring that?”

Lawlor concluded by responding to claims repeated in several media outlets that were RTE to boycott the Eurovision in apartheid Israel, it would have to do the same in other countries. She stated that “that is clearly not the case. The fact is that Palestinian civil society, in the face of decades of brutal oppression, has called for this boycott, such a call hasn’t been made by people oppressed by other states. Just as it was the right thing to do to respect the call to boycott apartheid South Africa, so it is with the Palestinian call.”