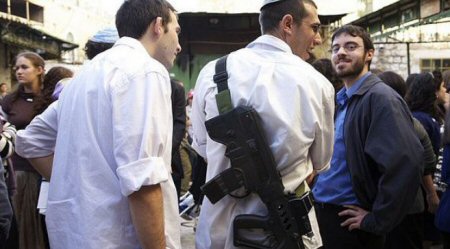 Israeli occupation authorities have issued a military order to confiscate nearly 25 acres of private Palestinian land, in the northern part of the occupied West Bank, as Israel moves ahead with land expropriation and settlement construction policies, in violation of international law and UN Security Council resolutions.

Ghassan Daghlas, a Palestinian Authority official in charge of monitoring Israel’s settlement expansion activities, told the PNN that Israeli officials have served orders to people in the villages of Qaryout and Jalud, located approximately 30 kilometers (19 miles) south of Nablus, notifying them of the decision to seize almost 100 dunams (24.7 acres), in order to expand the nearby Shilo settlement.

Daghlas added that similar notices had been distributed among the residents of Turmus Ayya town.

More than 600,000 Israelis live in over 230 settlements built since the 1967 Israeli occupation of the Palestinian territories of the West Bank and East Jerusalem.

The UN Security Council has condemned Israel’s settlement activities in the occupied territories, in several resolutions.

Less than a month before US President Donald Trump took office, in December of 2016, the United Nations Security Council adopted Resolution 2334, calling on Israel to “immediately and completely cease all settlement activities in the occupied Palestinian territories, including East Jerusalem”.

The last round of Israeli-Palestinian talks collapsed in 2014. Among the major sticking points in those negotiations was Israel’s continued settlement expansion on internationally recognized Palestinian territories.