Mustapha Awad: “Without you, I would not be here” by Myriam De Ly (VIDEO) 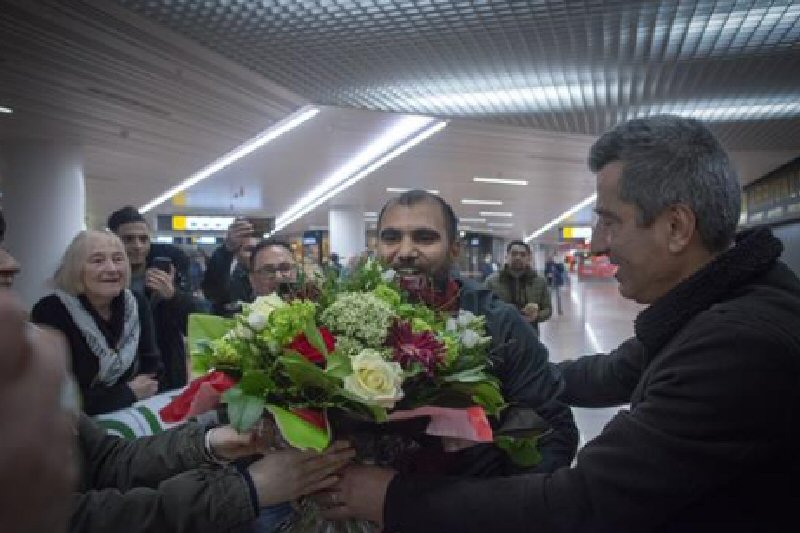 The following article, by Myriam De Ly, is translated from the French original at Pour La Palestine, the website of the Plate-forme Charleroi-Palestine: http://www.pourlapalestine.be/mustapha-awad-sans-vous-je-ne-serais-pas-la/

Mustapha Awad, a Belgian of Palestinian origin, was finally released one month ago on 28 March. He spent 253 days in detention in Israeli jails – 253 days too many. If he is here now, it is due to the mobilization of Belgian civil society, as the Belgian government failed to play its role. Below are some elements to assess the campaign for his release.

After days of worry about his whereabouts (Mustapha was in solitary confinement for interrogations in Israeli police and security facilities), his family, comrades and friends received the news that Mustapha had been arrested by the Israelis on the Jordanian-Palestinian border. A “Free Mustapha” Committee was trained on the job, involving members of the Palestinian community, the dance group Raj’een (which Mustapha co-founded) and many other associations to launch a campaign for his release. A Facebook page, a “Free Mustapha” site, a poster and a bank account were created, and a petition, photo and financial campaign was launched. This Committee, which worked together with Mustapha’s family, was able to gather the energies of hundreds and hundreds of people, both in the north and south of Belgium, supported by comrades in France, the Netherlands and Germany. Everyone understood that the arrest of Mustapha was a dangerous precedent for any Palestinian wanting to return to his country and for any activist for the Palestinian cause.

What follows are some elements in taking stock of the actions undertaken by the Committee.

She was able to defeat Israel and its Ministry of Security, which portrayed Mustapha as well as many other prominent figures in Palestinian civil society as “dangerous terrorists.” Lea Tsemel obtained the early release of Mustapha from a security prison, an extremely rare event. (1) The Ministry of Strategic Affairs has refused to accept this defeat: on its site it continues to attack and slander Mustapha: “Mustapha Awad, accused of terrorism, was released from prison. And now he moves freely in Belgium.” A scandalous attack on a man who has suffered in an Israeli prison solely for defending the Palestinian people.

The committee also engaged a Belgian lawyer, Joke Callewaert. We were able to cover the legal costs, thanks to an intense financial campaign and extraordinary solidarity.

In prison, Mustapha knew we were organizing in Belgium for his release 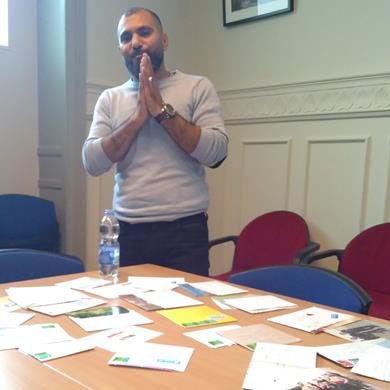 It was comforting for Mustapha to hear from his lawyer and the consul that actions were taking place in Belgium, and especially to receive mail. It was very important to him because his family in Lebanon could not visit him and he could not make or receive phone calls.

This harsh reality, to be totally cut off from one’s family, was experienced also by Salah Hamouri, the French-Palestinian lawyer and former prisoner. (2)

Writing workshops were organized in Aalst, Mons, Amsterdam and at booths for other activities. After his sentencing, Mustapha could receive cards, letters, photos. Unfortunately, the prison administration withheld a package. But the cards Mustapha received, he read and read them dozens of times. “Mustapha, you got so many cards! Congratulations, what solidarity!” the other prisoners congratulated him and shared his joy. In a short video below, Mustapha thanks all the people who mobilized and explains how much these letters meant to him and how they helped him to stay strong.

A mass campaign, rich in experiences

The kick-off of the campaign took place at ManiFiesta, where the Plate-forme Charleroi-Palestine shared its tent with the Free Mustapha Committee.

In four months, 14622 EUR was collected for legal costs. 7400 EUR of the funds donated also helped to cover Mustapha’s expenses, in Israeli prison and in Belgium.

The balance sheet of the financial campaign alone (in total, more than 22000 EUR) shows the enormous solidarity enjoyed by Mustapha in Belgium. All this thanks to the support gathered at events organized by the Committee or others (3) and donations from individuals (4) or organizations.

Over 700 people took to the streets in 10 actions: two rallies were held in front of the Israeli embassy (5), four meetings were held outside the Ministry of Foreign Affairs and Central Station in Brussels. In Charleroi, assoiations, unions and political representatives called for Mustapha’s release. At a meeting in Mons, a delegation was received by the mayor of the city. A rally was also held on the campus of ULB at the initiative of the Circle of Arab-European Students.

The campaign for the release of Mustapha was present at many activities organized by different associations.

Mustapha, metal worker and artist, had the support of the labor movement and the cultural and academic world.

Many union delegates participated in the campaign photos at meetings, actions or pickets (6). The FGTB, OMC, JOC, LBC-NVK (the equivalent of the CNE-GNC) and Vie Feminine signed the petition, as well as ACV-CSC Brussel-Halle-Vilvoorde, CSC Charleroi-Sambre & Meuse and the MOC Charleroi-Thuin. The latter also wrote letters calling for intervention by the Belgian government.

The Raj’een dance troupe which Mustapha co-founded was present at many events. A benefit concertwas organized by the “Free Mustapha” Committee in Brussels; “8 hours for Mustapha” took place in Tournai, at the initiative of Serge Hustache, MP and President of the Provincial College of Hainaut.

An open letter denouncing the unequal and uneven approach of the Belgian government to Nicaragua and Israel was signed by 64 figures, mainly from the academic world, and published on the sites of Vif and Knack. It finally forced Didier Reynders out of the woodwork…for two totally irrelevant tweets!

Suppporting the Belgian campaign, activists intervened from Lannemezan to Toulouse, from Amsterdam to Geneva, from Berlin to Lebanon – people and organizations mobilized for Mustapha. (7) The Samidoun site followed developments in the campaign, as did articles by Ali Abunimah and David Cronin at the Electronic Intifada. Amira Hass in Ha’aretz described how Israeli security tried to prevent Mustapha’s early release. Around 100 international organizations signed the petition demanding his release. Salah Hamouri, former prisoner and Franco-Palestinian lawyer, also showed his solidarity with Mustapha.

A delegation of the Free Mustapha Committee visited the Ministry of Foreign Affairs five times. From the first meeting, the members of the delegation spoke about the inhuman treatment of which Mustapha was the victim, during 25 days of interrogation in total isolation (sleep deprivation, interrogations 20 out of 24 hours). They explained that Mustapha’s conditions of detention did not comply with international law.

Two parliamentary deputies, Gwenaëlle Grovonius and Marco Van Hees, questioned Foreign Minister Didier Reynders on 17 October before the Committee on Foreign Relations: they received no answer to their relevant questions. The minister even allowed himself to lie about the calls that Mustapha could have made to his family, a basic right that was denied to Mustapha.

On 25 September, 2668 signatures in support of Mustapha’s release were gathered. We arranged a personal video call from Mustapha’s brother in Lebanon: no reaction. Total disregard for family and fellow citizens. Belgium even allowed (and still allows!) that Mustafa is slandered as a “terrorist in a suit” in official texts of the Israeli Ministry of Strategic Affairs. (8)

It was only a week after the early release decision for Mustapha that he received the necessary travel documents from the Belgian consulate for him to be deported. However, the Belgian authorities were well aware that he needed a temporary passport, as the Israeli security services claimed one month earlier to have “lost” his passport. Meanwhile, Mustapha was dragged from one prison to another: from Gilboa to Givon, from Givon to Megiddo. Currently, Belgium has still not even dared to claim back the Belgian passport that was confiscated during Mustapha’s arrest.

Alexis Deswaef, honorary president of the League of Human Rights, who worked tirelessly for the release of Mustapha, (9) declared on 6 February to the ministry:

“At the first meeting, we were told that we had to remain patient, that diplomacy was progressing, we would first make verbal notes. Then it was said that it was an exceptional case, that it was necessary to wait for the trial. And now that the judgment has taken place, but an early release is possible, we are told that nothing can be done. Belgium’s attitude was completely opposite during the arrest of Amaya Coppens in Nicaragua. Minister Reynders spoke the very next day after she was arrested by the Nicaraguan government. Why are there two weights, two measures? Because it is Israel.”

Listen also in the video below for his reaction after hearing Mustapha’s testimony the day after his release.

The Free Mustapha Committee extended itself fully to the Ministry of Foreign Affairs. In the Free Mustapha Committee, our Palestinian friends believed that we had to take a harsher position toward the Foreign Ministry from the start. Others advised us otherwise. We acted with caution, but, in the end, we realize we were naive. The Belgian state, loyal friend and trading partner of Israel, was going to do nothing for Mustapha. For it, the trade in diamonds and weapons was much more important than the defense of its citizen.

Mustapha is free, but more than 6,000 prisoners still need our solidarity

“Is this the end or the beginning?” asked a Palestinian committee member following the arrival of Mustapha in Belgium. What is certain is that the action by members of the committee will be extended, in different forms, for all Palestinian prisoners.

Mustapha brought all of us closer to the Palestinian prisoners. We lived through fear and stress thinking about what Mustapha could suffer in Israeli prisons. We also better understood the suffering of families and relatives of prisoners, meeting his family in Lebanon and through the role of his adoptive mother.

The campaign for Mustapha also raised the profile of Palestinian prisoners in Belgium. We are considering how to be more effective for them in our future campaigns, not forgetting of course Georges Ibrahim Abdallah, who remains imprisoned in France for 35 years. 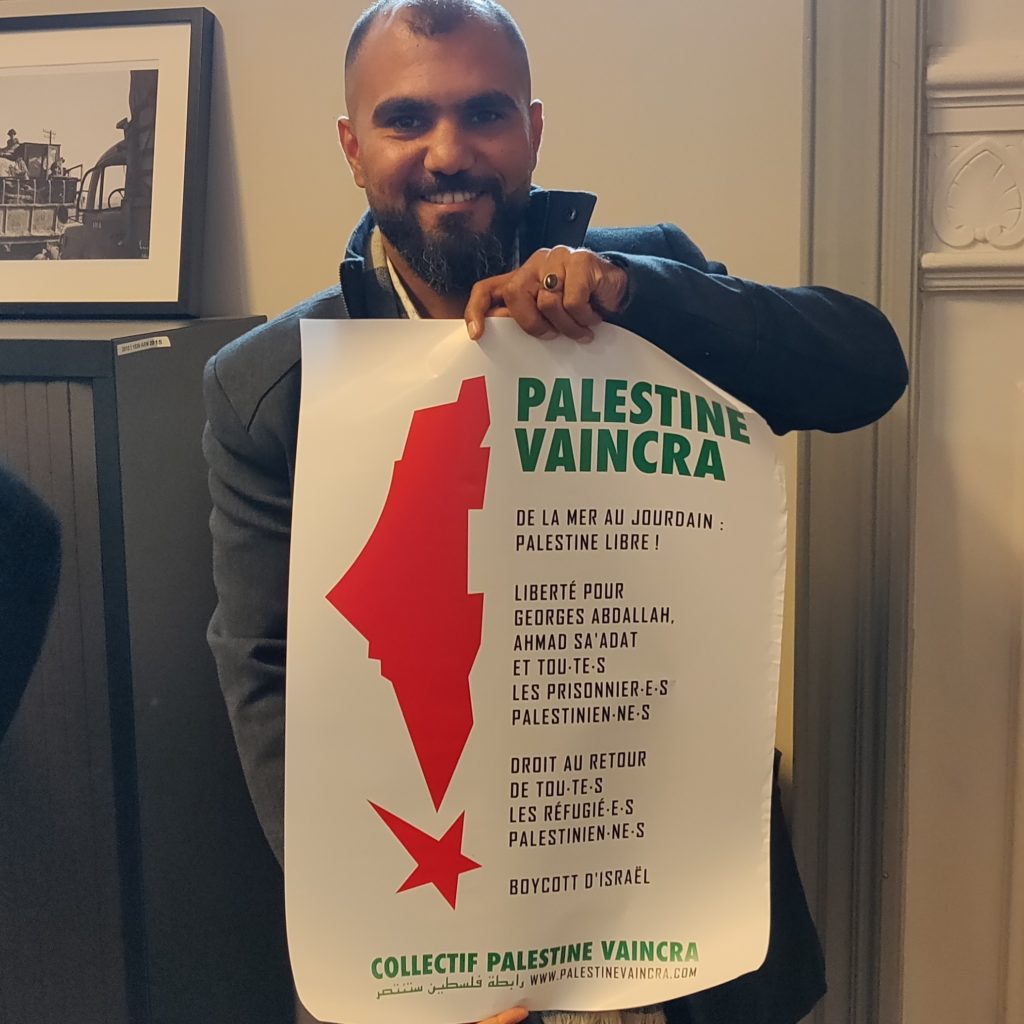 1. He had been sentenced to one year’s imprisonment on the basis of an empty file …
2. Salah Hamouri: “The conditions of detention are difficult, especially the collective isolation that we live in prison. Personally, I lived under the same conditions of detention as the other detainees, except that I was not allowed to receive visits from my wife and son who are forbidden to enter Palestine. It was a way of putting extra pressure on me.” http://www.pourlapalestine.be/salah-hamouri-les-israeliens-we-maintain-in-a-large-prison/
3. The “Race for Peace” in Ypres, the presentation of the play “Sage qui peut” , a “Christmas Dinner” of Intal Brussels, the sale of waffles from Comac Antwerp ….
4. Several people paid monthly 5 or 10 €
5. One rally was organized by the Free Mustapha Committee, the other by the ABP
6. In all, nearly 1,000 people were photographed with the “Free Mustapha” poster
7. A delegation from Charleroi visited the family of Mustapha
8. This is a text that criminalizes Palestinian prisoners, the prisoner movement, and Palestinian resistance in general, as well as the international boycott of Israel
9. He advocated to the top of the balcony of the Brussels City Hall

Human Interest 04/22/19 Beyond the Frontlines: Tales of Resistance and Resilience from Palestine U.S. Film Tour