Nakba at 69: Statement by the Global Palestinian Refugee and IDP Network 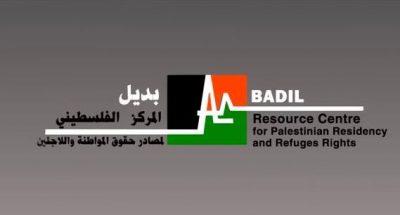 The Nakba is ongoing, not only through policies of ongoing displacement implemented through the Zionist-Israeli strategy which seeks to control the maximum amount of land with the minimum number of Palestinians on that land, but also through the failure of the international community and Arab states to uphold their obligations, the continued internal fragmentation, the disenfranchisement of the PLO, and the weak performance of the Palestinian Authority which is dictated by the restrictive Oslo Accords.

It is imperative to reassess and revise the current approaches to the Palestinian Question: the humanitarian aid and politically based approaches adopted by the international community based on the massive imbalance of power and void of any human rights foundations, resulting in what is known as the ‘peace process’ and the Oslo Accords, have failed to achieve justice and peace. Instead, these approaches have more deeply entrenched the Ongoing Nakba and facilitate Israel’s colonial domination and apartheid policies.
These abysmal circumstances have resulted in the continued denial of the collective and individual rights of the Palestinian people, as dictated by UNGA resolution 194 of 1948 and UNSC resolution 237 of 1967, for the return of the Palestinian refugees and internally displaced persons to their places of origin and Palestinian self-determination.

The resounding silence and lack of practical action by the international community in response to the Palestinian prisoners’ demands for dignified treatment; including access to health care, education, lawyers, families’ visits and tools of communication which constitute the most basic human rights is profound.

The lack of international response to the mass hunger strike of over 1000 Palestinian political prisoners who are in need of immediate intervention and protection symbolizes the dehumanization and demonization of the Palestinian people in their struggle for dignity, justice and freedom.

Likewise, the unchallenged ongoing primary, secondary and multiple forced displacement of the Palestinian people, whether in Mandatory Palestine or in the Shatat (exile), defies all norms, standards and best practices of international humanitarian and human rights law.

Accompanied by the absence of both international protection and less than the bare minimum of humanitarian aid and assistance, displaced Palestinians remain the largest and most marginalized forcibly displaced group in the world.
Today, 66 percent of the approximately 13 million Palestinians have experienced displacement at least once in their lifetime, with significant numbers experiencing it more than once.
The blatant disregard of the international community to uphold their responsibilities and obligations, coupled by the absence of adherence to dozens of international treaties, conventions and United Nations resolutions, allows not only the numbers of Palestinian refugees and internally displaced persons to continue to grow unabated, but subjects them to formal discrimination.

Meanwhile, the secondary displacement of Palestinian refugees in the Shatat (exile) is becoming a regular phenomenon: those who have previously resided in Arab countries like Syria, Iraq, Libya, Yemen, and other host/refuge countries, have been forced to flee due to the lack of protection and/or to escape armed and violent conflict.

Many second or third refuge countries have in one way or another fallen consistently and remarkably short of providing the requisite international protection to Palestinian refugees seeking asylum in their countries. Rather than considering their vulnerability as recognized refugees and ensuring equal treatment and assistance to Palestinian refugees, many countries have implemented discriminatory procedures and policies that have been extremely ineffective and detrimental, resulting in widespread and systematic violations of the most fundamental provisions of international refugee law.
While some countries closed their borders in the face of Palestinian refugees in violation of the well-established customary rule of non-refoulement, other countries have excluded them from schemes designed to provide asylum and protection to Syrian, Iraqi or Yemeni refugees who fled under the same circumstances. According to UNRWA, almost 280,000 Palestinian refugees are internally displaced inside Syria, and an estimated 43,000 are trapped in inaccessible locations.
Estimates show that in searching for safety and security over 120,000 Palestinian refugees have fled Middle East countries, mainly from Syria, Iraq, and Lebanon to Europe, Australia and Americas within the last five years.

International complacency vis-à-vis the rights of the Palestinian people can be traced back 100 years, when powerful states formalized the colonization of Palestine through the Balfour Declaration in 1917 and the Mandate for Palestine in 1922 in favor of the Zionist movement.

Today these same states continue to confer impunity upon Israel rather than end violations and international crimes perpetrated against the Palestinian people.  Instead of addressing the realities of Israeli practices and policies highlighted in the report of the UN Economic and Social Commission for Western Asia (ESCWA) regarding “Israeli Practices towards the Palestinian People and the Question of Apartheid”, the UN, under political pressure, withdrew the report. The withdrawal of the ESCWA’s report is an act that allows Israel to continue on the path of Apartheid and its non-compliance with international law.

On this the 69th commemoration of the Nakba, the Global Palestinian Refugee and IDP Network (GPRN) reiterates its previous recommendations (see Nakba statement 2015) and calls for: