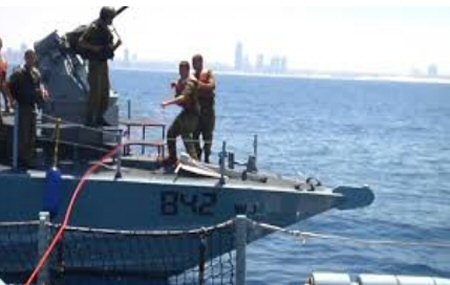 The Al-Mezan Center for Human Rights issued a statement strongly condemning the ongoing Israeli violations against the Palestinian fishermen, and the illegal confiscation of their boats, and called for the release of four fishermen, who were taken prisoner by the navy, on Tuesday, in two separate attacks.

Al-Mezan said its field investigations have revealed that, at 6:30 on Tuesday morning, Israeli navy ships opened fire at Palestinian fishing boats, nearly two nautical in Gaza territorial waters in the al-Waha sea in Beit Lahia, in the northern part of the coastal region, before surrounding a small boat with two fishermen onboard, and abducted them.

The two fishermen have been identified as Awad Nafeth Sultan, 21, from Beit Lahia, and Ahmad Emad Siyam, 20, from the Shati refugee camp, west of Gaza city. They were taken to an unknown destination, and their boat was confiscated.

Al-Mezan added that, approximately at one in the afternoon of the same day, the navy fired many live rounds at Palestinian fishing boats, less than four nautical miles from the shore, in Sheikh Ejleen Beach, southwest of Gaza city, and surrounded them, before abducting two fishermen, and confiscated their boat.

The two fishermen have been identified as Mahmoud Mohammad Miqdad, 35, and Hasan Soheil Miqdad, 26, from the Shati’ refugee camp.

Field research and documentation by the al-Mezan Center revealed that the Israeli navy carried 270 violations against Palestinian fishermen and their boats, since the beginning of this year, and that the navy fired live rounds at the boats 267 times, killing one fisherman, in addition to wounding sixteen others, and abducting 59, in addition to confiscating 18 boats.

It is worth mentioning that the slain fisherman, identified as Ismael Saleh Abu Ryala, 18, was killed when the Israeli navy opened fire on his fishing boat while he was fishing near the shore of Gaza.
It added that Israel continues to ban the entry of equipment and tools needed for fishing, as part of its ongoing and deadly siege on Gaza.

Al-Mezan called for the release of all abducted fishermen, and their boats, and demanded the international community to act on lifting the Israeli siege on Gaza, and ending the seriously escalating violations of international law, the Fourth Geneva Convention, and all related United Nations and human rights treaties.

It said that Israel continues to abduct, humiliate and harm the fishermen, in addition to the destruction of their boats and equipment, as part of its illegal siege on Gaza, and its deliberate violation against the civilian population.

Meanwhile, Israeli news outlets reported that Israel expanded the allowed fishing zone from the current three nautical miles, however, Israeli naval forces opened fire at several fishing boats, as they were working within the permitted fishing zone, forcing them to sail back to shore.

Following the latest Israeli offensive on the Gaza Strip in 2014, a ceasefire agreement between Israel and Palestinian armed groups was brokered by the Egyptian government, which allowed fishermen to sail up to 6 nautical miles, but Israel continued to violate the agreement.

Under the Oslo Accord, signed between Israel  and the Palestine Liberation Organization in 1994, Israel is supposed to allow the Palestinian to fish and sail within 20 nautical miles.

Head of the Fishermen Union in Gaza, Nizar Ayyash, told Ma’an News Agency that two Palestinian fishermen were detained by Israeli naval forces off the coast of the al-Waha area, in northern Gaza.

The fishermen were transferred to an unknown location.

Meanwhile, Israeli news outlets reported that Israel expanded the allowed fishing zone from the current three nautical miles, however, Israeli naval forces opened fire at several fishing boats, as they were working within the permitted fishing zone, forcing them to sail back to shore.