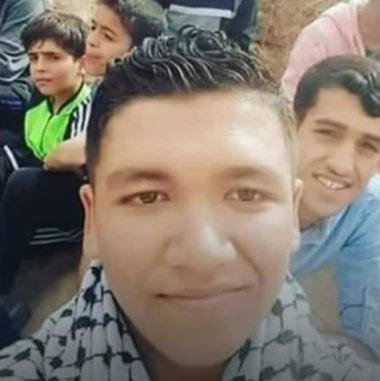 The Palestinian Health Ministry has confirmed, Tuesday, that Israeli soldiers killed a teen, and injured five other Palestinian, east of Deir al-Balah, in central Gaza.

The Ministry said Montaser Mohammad Ismael al-Baz, 17, was shot and seriously injured with a live round in the head.

The seriously wounded Palestinian was transferred to the Al-Aqsa Hospital, and was later rushed to the Shifa Medical Center, due to the seriousness of his condition, but succumbed to his wounds.

It added that at least five other Palestinians were shot live ammunition, when the soldiers, stationed in fortified sniper posts hundreds of meters across the border fence, targeted Palestinian protesters in their lands, near the perimeter fence, in central Gaza.

On October 19th, 2018, the Al-Mezan Center for Human Rights has reported that the army killed 217 Palestinians in the Gaza Strip, including 163 who were killed at the protests, among them 33 children, one woman, two journalists, three paramedics, and four persons with disability, since the Great Return March processions started in the Gaza Strip on Palestinian Land Day, on March 30th, 2018.

Of those injured, 6,392 were hit by live fire, including 1,016 children and 120 women. The Israeli military continues to hold the bodies of ten of the killed, including of two children.

The Palestinians are demanding the legitimate internationally guaranteed Right of Return, to their villages and towns, which they are forced out from in 1948, before Israel was established in the historic land of Palestine.

They are also demanding an end to the deadly 12-year blockage and siege on about 2 Million Palestinians living in the devastated and war-torn Gaza Strip.

It is worth mentioning that, on October 22, 2018, the soldiers killed a Palestinian, identified as Moammar Arif al-Atrash, 42, near the Ibrahimi Mosque, in the southern West Bank city of Hebron.

At least six Palestinians were shot and injured with live ammunition, including one seriously, as Israeli forces opened fire towards dozens of Palestinians who rallied near the borders with Israel to the east of Deir al-Balah area, in the central Gaza Strip, said WAFA sources.

Israeli soldiers stationed along Gaza’s borders opened live fire towards demonstrators as they allegedly approached the barbed-wire fence between Gaza and Israel, shooting and injuring at least six people; one abdominal injury was deemed critical.