Netanyahu at the UN General Assembly: An Exercise in Absurdity 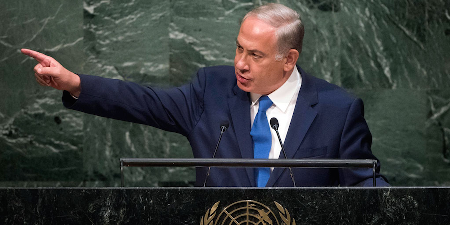 In his speech at the 71st session of the General Assembly of the United Nations, Prime Minister of Israel, Benjamin Netanyahu, didn’t engage only in deception and distortion; he also demonstrated his expertise in demagoguery and absurdity.

As Zehava Galon, the chairperson of the Israeli political party Meretz pointed out, Netanyahu’s speech fundamentally lacked credibility even before he opened his mouth. If he really wanted peace, he would have already evacuated Israel’s colonial outposts in the West Bank and East Jerusalem.

The target of his speech, this time around, was not Palestinian President Mahmoud Abbas, but the administration of U.S. President Barak Obama. Netanyahu hopes to guarantee a veto by the U.S. on any measures proposed against Israel in the United Nations, especially in light of Palestinians’ intent to submit a United Nations Security Council resolution on illegal settlements this month.

His speech describes Israel’s situation in contradictory terms: The “only democracy in the Middle East” is in peril, he says, because the Palestinian people refuse to recognize its “Jewish character”. This formulation, of course, ignores the fact that the state of the occupation and the Palestinian Liberation Organization have enjoyed mutual recognition since 1993. Nevertheless, he insists, the whole of the Palestinian people must profess the Jewishness of the state too. He wants us to say that our struggle is illegitimate and that Zionism – a racist, colonial movement – is actually the struggle for “national liberation.”

In putting forth this analysis, Netanyahu again refuses to acknowledge the occupation’s political and moral responsibility for the Palestinian catastrophe, our forced expulsion, refugee crisis, and loss of land.

But, Mr. Netanyahu, Germany still pays reparations for Nazi Holocaust. So, why is it that we have no right to demand accountability from Britain for what it did against our people — for the crime of planting a usurper entity on our land? Britain should acknowledge its legal, political, financial and moral responsibility for the Palestinian people’s expulsion from their land and pay reparations as long as the sun shines on earth.

The second issue Netanyahu identifies, as a foundational element of the ongoing conflict, is the Palestinian people’s alleged propensity to incite our own children. Netanyahu characterizes typical advice given by Palestinian mothers to their children as: “the more Jews [they] kill, the more money [they’ll] get.”

But, Netanyahu never asks what the reasons are that compel our children to carry knives. He did not mention in his speech the humiliating checkpoints, or stop and frisks of Palestinians by Israeli soldiers and police alike. Nor did he mention the executions, like one captured on camera of martyr Abed al-Fattah al-Sharif in Hebron. He also forgot 16-year-old Muhammad Abu Khdeir, who was burned alive and murdered by Israeli settlers in 2014.

Our children want to live in peace and security like all other children in the world. They want to live in a country that guarantees them their freedom. They want a future in which they can realize their dreams, far away from your occupation, your oppression, your army, and your settlers, all of which come to our villages and refugee camps to shoot and disable our children, and arrest and torture our people.

Netanyahu uttered one truism, in his speech at the assembly — namely that many of the Arab Countries no longer look at Israel as the enemy, but an ally bound in enmity towards Iran and ISIS. He knows that the Palestinians are weak and divided, and the Arab World is contending with the self-destroying chaos of internal wars.

This situation allows Netanyahu to continue his demagoguery and absurdity, peppered with derogatory statements about international organizations that don’t notice because they are preoccupied with other parts of the region.

With the world distracted and the political will of international bodies malfunctioning, he can continue to walk away from any serious commitment towards peace.