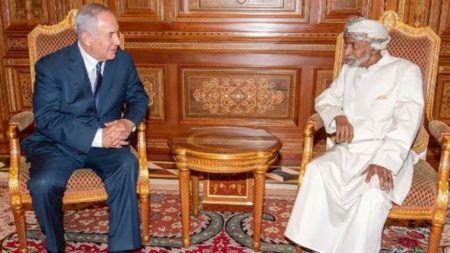 “I intend, in the coming years, to conclude normalization and peace agreements with a number of Arab countries,” he said Sunday night, recalling in particular his trip to Oman, a country with which Israel has no formal diplomatic relations.

According to Al Ray, Netanyahu met Oman’s Sultan Qaboos in Muscat, in October of 2018. The controversial visit was kept secret until after the Israeli premier had returned to the occupied territories.

The Israeli premier made the new remarks at a Likud event in Tel Aviv, in which he touted what he characterized as his past diplomatic achievements and pledged more successes.

Jordan and Egypt are the only two Arab states that have diplomatic ties with Israel. However, reports have indicated that several of them, including Saudi Arabia, the United Arab Emirates and Bahrain, have had secret relations with Tel Aviv. Israel and the Persian Gulf Arab states have dramatically increased their contacts since June 2018, when Bahrain hosted a US-led conference where the “economic” part of President Donald Trump’s “peace” plan for the Middle East was unveiled. Israeli Foreign Minister Israel Katz visited the UAE capital city of Abu Dhabi, in June of last year, for a UN environmental conference, wherein he discussed cooperation against Iran, as well as economic and transport collaboration.

On October 26, 2018, the Israeli culture and sports minister, Miri Regev, traveled to the UAE to accompany Israel’s judo team at the Abu Dhabi Grand Slam 2018. Her visit marked the first of its kind by an Israeli minister to a Persian Gulf littoral state.

Israel will also take part in the Expo 2020 world fair in Dubai next year.

The recent moves have angered Palestinians, who see normalization as an attempt to liquidate their cause, internationally.

Netanyahu also noted that simultaneously with reaching peace deals with Arab countries, he would annex West Bank settlements with US support.

Israel occupied the West Bank during the 1967 Six-Day War with several regional Arab countries, in a move never recognized by the international community.

More than 600,000 Israelis live in over 230 settlements built since the 1967 Israeli occupation of the Palestinian territories of the West Bank and East Jerusalem al-Quds.

Palestinians want the West Bank as part of a future independent Palestinian state, with East Jerusalem al-Quds as its capital.