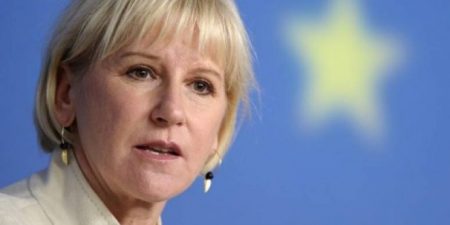 Israeli Prime Minister Benjamin Netanyahu has reportedly refused to meet with pro-Palestinian Swedish Foreign Minister, Margot Wallstrom, who is due to visit on Thursday.

According to Haaretz, Wallstrom will arrive in Israel on Thursday, but will be met by no Israeli officials, who claimed the move is due to scheduling conflicts, but informed sources attributed the snub to Sweden’s pro-Palestine position.

The Swedish FM will not meet with any Israeli officials during her stay, with the government effectively boycotting her over her controversial statements on the Israeli-Palestinian conflict.

A Foreign Ministry official told Haaretz that while Wallstrom had reached out to try and arrange meetings with Prime Minister Benjamin Netanyahu and other ministers, she had been informed that these would not be possible due to schedule considerations.

But the unnamed official added, according to the PNN, that the Israelis were simply uninterested in meeting with Wallstrom, due to her government’s positions on the conflict, as well as her own past comments.

“We’ve reached the conclusion that there’s no one to talk to and nothing to talk about,” he said.

The 61-year-old Social Democrat has repeatedly enraged Israel, starting with Sweden’s recognition of a Palestinian state shortly after she became foreign minister, in October of 2014.

In one of her retorts, she identified the Israeli-Palestinian conflict as one of the factors, explaining why “there are so many people who have become radicalized.”

In December of last year, she called on Israel to halt what she called “extrajudicial executions” against anti-occupation knife-wielding Palestinians, following up with a demand for “thorough” investigations into the killing of Palestinians by the Israeli occupation army.