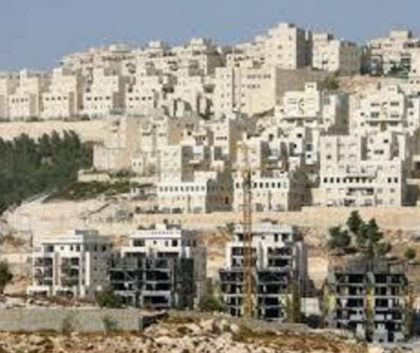 The Israeli government and the Jerusalem City Council are advancing a plan to build 2,500 units in the Gilo colony, south of occupied East Jerusalem. Gilo was built on lands owned by Palestinians from Beit Jala, al-Walaja and Batteer in the West Bank district of Bethlehem.

The new construction plan, that enjoys the approval of the Jerusalem City Council, is being pushed by private developers, and targets around 200 dunams of privately-owned Palestinian lands.

Israeli daily Haaretz said the developer Nehemiah Davidi and architect David Guggenheim are working on presenting a master plan meant to “outline the actual details of the new neighborhood.”

Haaretz added that the plan will face some difficulties due to what it called “American opposition” to Israeli constructions in the West Bank, and that another construction plan, named “South Gilo Terraces,” was delayed “due to political pressures.”

Israel’s colonies in and around occupied Jerusalem, and the West Bank, are illegal under international law and the Fourth Geneva Convention to which Israel is signatory.

While the Palestinians are losing their lands to Israel’s illegal colonies and the Apartheid Wall, Tel Aviv continues to advance plans to build and expand in the occupied West Bank, including in and around occupied East Jerusalem.

In the same month, the so-called “Israel Land Authority released tenders for the construction of 323 units in occupied Jerusalem.

According to the new plan, 130 housing units will be built in the Har Homa settlement on Abu Ghneim Mountain, east of Bethlehem, 89 others in Gilo settlement, to the south of Jerusalem, 68 in Pisgat Ze’ev and Neve Yaakov settlements, north of Jerusalem.