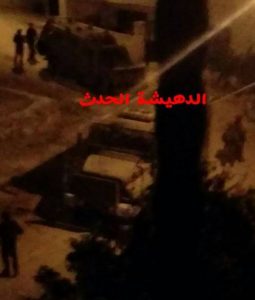 Israeli soldiers invaded, on Tuesday at dawn, the Deheishe refugee camp, south of Bethlehem, kidnapped a former political prisoner from his home and injured seven Palestinians during ensuing clashes.

Local sources said the soldiers broke into and searched several homes, including the home of former political prisoner, Nidal Naim Abu Aker, 48, and abducted him.

The invasion led to clashes between the soldiers and dozens of local youths, who hurled stones and empty bottles at the military vehicles, while the army fired dozens of live rounds, gas bombs, and concussion grenades.

It is worth mentioning that Abu Aker previously spent eleven years imprisoned in Israeli detention centers under arbitrary Administrative Detention orders without charges or trial. He was released some months ago after holding an extended hunger strike.

The Deheishe News has reported that the soldiers shot seven Palestinians with live rounds, while many others suffered the effects of teargas inhalation, and added that the army also used a surveillance drone during the invasion.