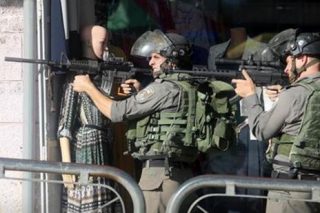 The Hebron office of the Palestinian Prisoners Society (PPS), in the southern part of the occupied West Bank, has reported that Israeli soldiers have kidnapped, on Tuesday at dawn, four Palestinians in a number of towns in the district.

It added that the soldiers also kidnapped a young man, identified as Monther Abu Warda, from his home in the al-Fawwar refugee camp, south of Hebron.

Another Palestinian, identified as Mohammad No’man Za’aqeeq, was kidnapped from his home in Beit Ummar town, north of Hebron after the soldiers violently searched his home and several nearby homes.