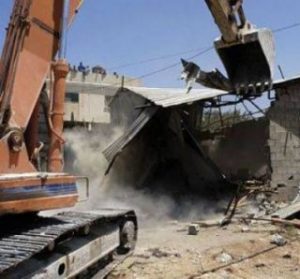 Rateb Jabour, the coordinator of the National and Popular Committees against the Annexation Wall and Colonies in the southern part of the West Bank, said the soldiers surrounded the village before invading it.

He added that the five sheds were located close to the Carmiel illegal colony, built on private Palestinian property.

The demolished residential sheds belong to several members of the al-Hathaleen family, and have been previously demolished eight times. Israel is frequently trying to displace the villagers in order to replace the indigenous Palestinians, to expand illegal nearby colonies.

Um al-Kheir, a small Palestinian Bedouin community, was built by the residents under funding from the European Union.

It is worth mentioning that the soldiers have kidnapped, at dawn, four Palestinians from their homes, in a number of towns in the Hebron district.