New Settlement Planned for Amona Evacuees — 140,000 to be Forced Out of Jerusalem 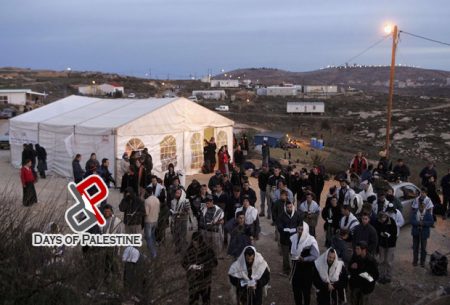 The Israeli Civil Administration’s High Planning Committee approved, on Sunday, the building of a new colonial settlement in the occupied West Bank for the evacuees from the Amona settlement.

Amona was an unauthorized Jewish-only settlement near the West Bank city of Ramallah. Owners of the land on which the settlement was built won a battle in the Israeli courts which led the occupation government to evacuate it three months ago.

Israeli TV Channel 7 said, according to Days of Palestine, that the coordinator for Israeli activities in the occupied Palestinian territories, Major General Yoav Mordechai, had already green-lighted the launch of the new settlement.

Additionally, Channel 7 reported that the new settlement was located on state land because it was not privately owned. However, Quds Press said, the appropriated land is part of the Palestinian villages northeast of Ramallah.

There are some 196 government-recognized Israeli settlements scattered across the Palestinian territory, all considered illegal under international law.

While the Israeli government has carried out demolitions of Israeli outposts in the past, most notably the demolition of Amona, earlier this year, it has, at the same time, fast-tracked the expansion of official Israeli settlements throughout the Palestinian territory.

As a part of its demographic war in Jerusalem, Israel has decided to force more than 140,000 Palestinians out of the city’s boundaries.

The Shu’fat Refugee Camp, in occupied East Jerusalem, and the town of Kafr Aqab, in the north of the city, will no longer be considered to fall within Jerusalem’s municipal boundaries, Israeli Jewish Channel 10 revealed on Sunday, according to Gulf News.

Channel 10 reffered the news, which confirms long-held Palestinian suspicions of a systematic Israeli plan to ensure a Jewish majority in the city, to security sources.

The move has been finalized by the Israeli national security council, and will be implemented to coincide with the 50th anniversary of the Jewish occupation of the holy city.

According to Fakhri abu-Diyab, who heads the local committee in defense of occupied Jerusalem, taking Shuafat camp and Kafr Aqab out of the municipal boundaries of Jerusalem will mean that the Palestinians’ blue Jerusalem identity cards will be replaced with green West Bank cards.

He said that Israel plans to set up a local council outside Jerusalem boundaries, to run the two areas, while reserving sole security control there.

Muneer Zughair, leader of the Jerusalem neighbourhoods’ committee, said that residents of Shu’fat Refugee Camp and Kafr Aqab were already suffering from a lack of municipal services and facilities, and from frequent water shortages.

Residents of Kafr Aqab has sued the occupation municipality several times for failing to provide municipal services, despite paying taxes to the Israeli government.

Israel occupied the eastern part of Jerusalem in 1967 and annexed it in the early 1980s. Israel wants a united Jerusalem as its eternal capital, and has been forcibly displacing Palestinians to take over the city entirely.

05/29/17 Israeli Curriculum to be Taught in Palestinian Schools