Israeli Curriculum to be Taught in Palestinian Schools 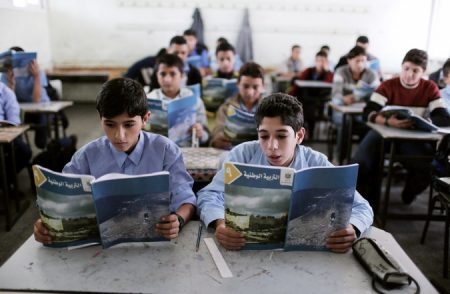 The Israeli cabinet approved, on Sunday, a plan to expand the teaching of Israeli curriculum in East Jerusalem Palestinian schools for the next five years.

According to Al Ray, the plan proposed an increase within the first grade, along with an increase in the number of those eligible for the Israeli “Bagrut” certificate that sits in parallel to the Palestinian “Tawjihi” certificate.

Israeli daily Haaretz reported that the plan, which was proposed by Israeli minister of education Naftali Bennett and the minister of Jerusalem affairs Ze’ev Elkin, allowed for economic incentives to be given to schools that  teach the Israeli curriculum, while the schools which do not apply this plan will not get an increase in their budgets.

The Israeli occupation government will form a committee to implement a plan to apply the curriculum in the schools, along with the process of funding it.

Bennett claimed, in a statement, that the plan aims to improve the quality of life in the Arab communities in Jerusalem and to enhance their integration within the Israel economic sphere and community.