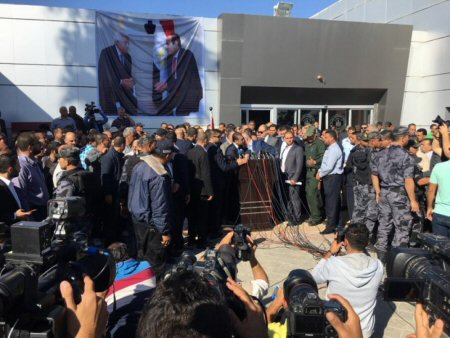 As a step towards implementing the latest reconciliation agreement made in Cairo between Hamas and Fateh, the Palestinian Government of National Consensus, early Wednesday, took control over the border crossings of the Gaza Strip, under the supervision of the Egyptian Government.

During a press release held at the entrance of Rafah Border Crossing, in the presence of Minister of Housing and Public Works Mufid al-Hasayneh, Director-general of the General Administration for border and crossings Nathmi Muhanna, representative of the Egyptian government, and other officials, the Egyptian and Palestinian National anthems had been played.

Al Ray reports that Palestinian Authority (PA) Minister Mufid al-Hasayneh stated, during the conference, that the National Consensus Government had begun assuming its duties in the Gaza Strip’s crossings, through the General Administration for Border and Crossings.

The minister added that the government has decided to stop the collection of all taxes and fees in the Strip since Wednesday, indicating that the Prime Minister will visit Gaza in just a few days.

He expressed wishes that this step will serve as a real take-off towards achieving Palestinian national reconciliation and ending the page of internal division for ever, confirming that the government will accomplish the reconciliation in spite of the all obstacles and challenges.

Al-Hasayneh expressed gratitude to the Egyptian government for its tremendous efforts in fostering the reconciliation.

In turn, spokesman for the Border and Crossings Authority in Gaza, Hisham Adwan, confirmed that there is not going to be any presence for former Gaza employees, and that PA employees would take full control of the Gaza crossings.

He pointed out that the step of handing over control of Gaza’s crossings, to the Palestinian Government of National consensus, is the beginning to achieve a comprehensive reconciliation and end the division that lasted for eleven years.

It is worth mentioning that ministers of the Palestinian National Consensus Government took office in the Gaza Strip, after the weekly government meeting held in Gaza on October 3, 2017.

All this came after Hamas’s announcement to dismantle the administrative committee that was running the Gaza Strip, and its calling on the Government of National Consensus to assumes its duties and responsibilities in the Strip immediately in an effort to promote reconciliation with the Palestinian Authority.

Opinion 10/19/17: Pitfalls of the Fateh-Hamas Reconciliation