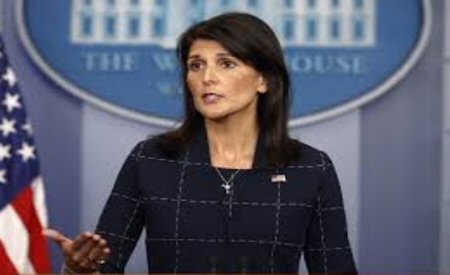 U.S. Ambassador Nikki Haley said, on Tuesday, that she has read the Trump administration’s much-anticipated Middle East peace plan. And while it is “getting close,” it will not be rolled out later this month, during the U.N. General Assembly, as some had predicted.

“I can tell you that Jared Kushner and Jason Greenblatt have done unbelievably detailed work in it,” Haley said of the two presidential advisers tasked with coming up with a plan to resolve one of the world’s most intractable crises. “I have read the plan. It is thoroughly done. It is well-thought-out from both sides — the Palestinians and the Israelis.”

Haley, who is also a member of President Donald Trump’s cabinet, said she couldn’t “say enough good things” about the proposal and warned that “there are a lot of false statements” circulating about it. She added that the proposal would only work if both sides would hear it, and urged the international community to put particular pressure on Palestinian President Mahmoud Abbas to come to the table.

“For the good of the Palestinian people, the region, the international community, we have to put pressure on Abbas and say it’s time. It’s time for a better life for the Palestinians,” Haley said. “And only he can deliver that.”

The Trump administration has seen its relations go from bad to worse with the Palestinian Authority, peaking in December over the White House’s decision to move its embassy from Tel Aviv to Jerusalem.

On August 31. the United States cut off all funding to UNRWA where State Department explained that US would no longer commit to funding what she called “this irredeemably flawed operation.”

Some observers say the United States is using the cutoff as leverage to force the Palestinians to negotiate a peace deal with Israel.