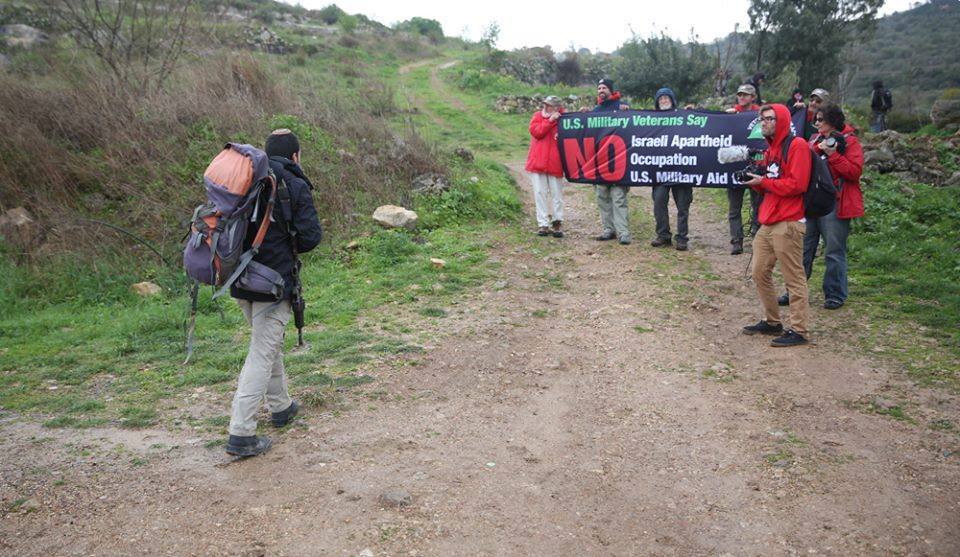 In Nabi Saleh village Friday, a group of Palestinian, Israeli and international peace activists held a non-violent march to the location of a water well which was seized by armed Israeli colonial militia fighters in the area. The demonstrators were then attacked by both Israeli soldiers and armed colonizers.

Among those who participated in the protest were members of a delegation of US Veterans, who wrote an extended account of their experience at the protest. They observed that the Israeli colonial militia members appeared to be most focused on attacking women, children, and people with cameras, while leaving the larger adult male veterans alone. A video of the incident shows Israeli settler militia members rushing into a crowd of protesters and grabbing, pushing and beating people. Israeli soldiers, as if to provide backup for the violent assault, fire tear gas and concussion grenades at the demonstrators.

Throughout the video, the international and Palestinian non-violent activists can be heard chanting “1-2-3-4 Occupation no more”. The Israeli settler militia members also push down the videographer at one point, as well as attacking another journalist wearing a bright vest labelled ‘PRESS’.

Nabi Saleh has a long history of non-violent resistance to the Israeli occupation and illegal colonial expansion onto their land. A 2015 profile in the Guardian newspaper describes the impact of the occupation and the non-violent resistance on the Tamimi family, one of the main extended families in the village. According to that article, “The Nabi Saleh Solidarity Campaign – led by Bassem Tamimi, who was once designated a “prisoner of conscience” by Amnesty International when he was jailed by Israel for his activism – hold their demonstrations to protest against the theft of their land and water by Israelis who live opposite the hilltop village in the settlement of Halamish.”

That article continues, “They are clashes that have sometimes cost the lives of Palestinians. Bassem Tamimi’s brother-in-law Rushdi died after being shot at another protest in 2012 while Tamimi was in prison. Another member of the extended family died after being hit in the face by an Israeli teargas canister.”

Most recently, 16-year old Ahed Tamimi was denied a visa to travel to the US to participate in a speaking tour. According to Nora Barrows-Friedman of the Electronic Intifada, the visa for Ahed Tamimi was put into “administrative review” by the US consulate without an explanation.

Tamimi is part of a family known for their activism work in the village, where residents have long resisted Israeli land confiscation for nearby settlement colonies. In August 2015, Tamimi, her mother and her aunt intervened to rescue her 12-year-old brother from an attempted abduction by an Israeli soldier. The incident was caught on video.