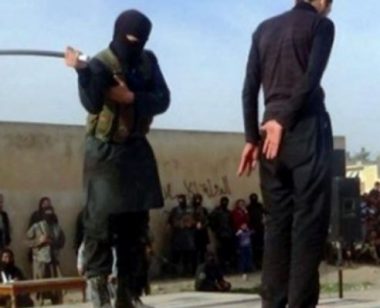 Fighters of ISIS terrorist organization in Syria, occupying large areas on the al-Yarmouk refugee camp, in Damascus, have executed, among others, four Palestinian refugees, and issued orders to its gunmen to execute any person who raises a Palestinian flag.

One of the executed refugees has been identified as Mohammad Nassar, while another was from Oleyyan family, and two others from Tayha family.

Also, ISIS ordered the execution of any person who raises a Palestinian flag in areas controlled by the terrorist group.

This is not the first time that ISIS destroys and removes Palestinian flags and symbols; in 2016, its gunmen removed and destroyed posters of the late Palestinian President Yasser Arafat, and in various cases burnt and stepped on Palestinian flags.

In 2015, ISIS fighters managed to invade and occupy large areas of al-Yarmouk Palestinian refugee camp, in collaboration with fighters of Nosra terrorist organization.