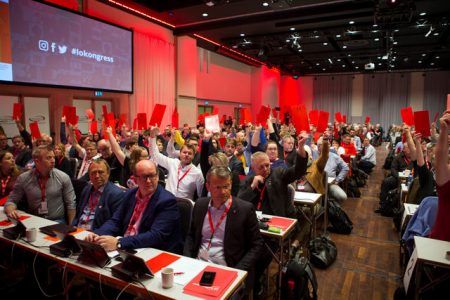 The Norwegian Confederation of Trade Unions (LO), representing close to one million workers, has endorsed a full boycott of Israel to achieve Palestinian rights under international law. LO is the largest and most influential umbrella organization of labor unions in Norway.

The Palestinian Boycott, Divestment and Sanctions National Committee (BNC) salutes the Norwegian Confederation of Trade Unions (LO) for endorsing a full “international economic, cultural and academic boycott of Israel” as a necessary means to achieve Palestinian fundamental rights, including the right of return for the refugees and equality for Palestinian citizens of Israel.

By courageously heeding the Palestinian BDS Call, issued by an absolute majority in Palestinian civil society in 2005, LO joins some of the world’s most important trade union federations, including South Africa’s COSATU, Brazil’s CUT, Quebec’s CSN and the Irish ICTU, in calling for meaningful BDS pressure on the corporations and institutions that have enabled decades of Israeli occupation, settler-colonialism and apartheid.

The BNC hopes to closely coordinate with Norwegian partners within LO, particularlyFagforbundet, to translate this new policy into effective measures of accountability at the academic, cultural and economic levels to uphold human rights and international law. We also call on LO to apply pressure on the Norwegian government to end all its military ties with Israel’s regime of oppression and to divest its sovereign fund from all companies that are complicit in Israel’s occupation and illegal settlement enterprise.

The Palestinian BDS National Committee (BNC) is the largest coalition in Palestinian civil society. It leads and supports the global Boycott, Divestment and Sanctions movement. Visit www.bdsmovement.net and follow @BDSmovement.